Lindenwood University’s Theatre Department will present a production of Legally Blonde: The Musical at 7:30 p.m. on Oct. 29-31 in the Broadway-style Lindenwood Theater. 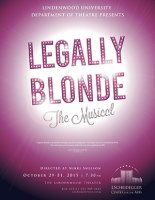 Tickets for the production cost $10-$18 and are available at the Lindenwood Box Office, (636) 949-4433, or online at LUBoxOffice.com. The Box Office and the Lindenwood Theater are located in the university’s J. Scheidegger Center for the Arts, 2300 West Clay St., in St. Charles, Mo.

The musical, based on the Amanda Brown novel and MGM movie of the same name, debuted on Broadway in 2007 and is directed by Nikki Snelson, a St. Louis native and 20-year veteran of Broadway who was recruited by Emily Jones, chair of the Lindenwood Theatre Department, to direct the production.

“To have a director with her amount of professional experience directing a student production is unprecedented at Lindenwood and provides our students with a learning experience that is hard to come by,” Jones said. “Snelson’s direction sets the bar higher than ever before for our students, providing new challenges and perspectives that have resulted in a fun, exciting, and unique production.”

For more information about the Lindenwood University Theatre Department, contact Emily Jones at ejones1@lindenwood.edu or (636) 949-4838.