With this issue, our sixth, we are able to look more clearly ahead and see issues seven and eight.

We now have a number of manuscripts that we are going to publish. This fortunate situation allows us to plan regarding certain topics that we would like to see covered in the Missouri Policy Journal. Knowing that we can plan and address issues, we feel, is important to Missouri.

There are always pertinent issues that do not receive enough attention, and the Missouri Policy Journal can publish articles that address these issues in balanced and in-depth ways. It is our hope that our articles can be relevant to policymakers and help them to better understand and develop programs and policies.

As the editor, I have frequently met both elected and non-elected public officials who are seeking information to help them better understand issues they need to confront and solve, and our aim is that Missouri Policy Journal can be part of the policy process mix.

Increasingly, as we look at the number of times our journal has been accessed online from the previous year, we see an upward trend. Readers are finding us; that is a sign of progress. 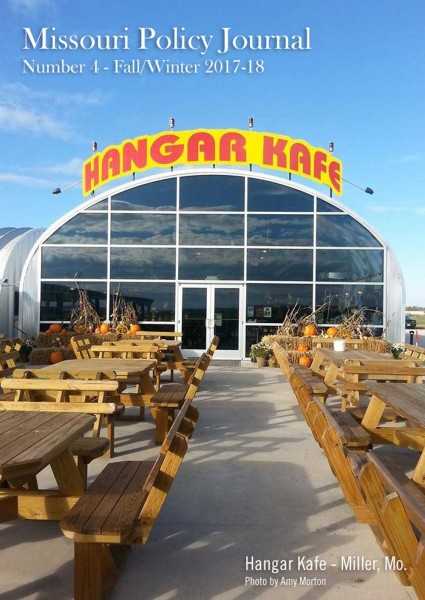 The Hangar Kafe opened in April 2013 and is owned by Kiman Kingsley. The Kingsley family has been around the Miller area for more than 100 years and knows most everyone in the area. Kiman and his brothers also have a farming operation and a thriving crop dusting business as well as an Ag Aviation School.

The Hangar Kafe is housed in an airplane hangar and located on the Kingsley Field, a busy rural airport. This reflects how much the Kinglsey family loves flying. The walls in the cafe are painted sky blue and decorated with aviation photos, large model planes, and hot air balloons. The restaurant's cash register sits on an hot-air balloon basket. The cafe is open for breakfast, lunch, and dinner and has an all-American menu. All food is made to order, so if you have to wait, consider one of our many appetizers. The cafe has a great outside dining area also.

The cafe sits on a working airport, so it's quite possible while your eating you may see planes flying in and out.

We offer plan rides and hot air balloon rides, weather permitting. On weekends, skydivers land right in front of the cafe. Watch for all the special events. We have several throughout the year.

A customer said it best "The food is great but the atmosphere is even better."

Introduction by the Editor for this Issue

The three articles that comprise this special edition of the Missouri Policy Journal represent the initial work in the Missouri Growth Project. The Center for Economics and the Environment  is undertaking this project for the simple reason that, as you will discover in the following studies, the Missouri economy is so slow that it ranks near the bottom when compared to the other forty-nine states.

The fact that the growth rate of Missouri’s economy is low is not merely a statistic. If this continues, Missouri residents and households will see their incomes rise more slowly than those in other states. They also will be more likely to experience poor health outcomes: higher rates of obesity, diabetes, heart disease, and other life-shortening disorders. The products of slow growth will become increasingly difficult to solve, whether by market forces or through government intervention.

The first phase of the Missouri Growth Project focuses on the role of education. The authors of the studies comprising this special edition were asked to investigate and report on the state of education in Missouri, and how it relates to the state’s stagnant economic growth. Though the authors bring different viewpoints to the conversation, there is a common thread to their conclusions: Missouri’s educational system is not producing graduates with the cognitive skills necessary to compete for the jobs of the future.

The first paper by Timothy J. Gronberg, Dennis W. Jansen, and Lori L. Taylor provides a broad analysis of the current state of the Missouri economy and how we got here. In “The State of the Missouri Economy and Workforce” the authors follow a common approach to thinking about growth: Growth is the product of how the economy combines labor, physical capital, and the “knowledge” that brings inputs to production together. I use the term knowledge instead of technology, because knowledge encapsulates the current understanding of how we produce and use technology and other ideas that help us better organize production or create new innovations that raise worker productivity.

A bright spot in the Gronberg, et al. analysis is that the growth in Missouri’s capital has roughly kept pace with the US average over the past two decades. This suggests that capital is not the culprit in explaining Missouri’s low growth. But that is the only bright spot.

Gronberg et al. examine the composition of the state’s industries to see if this could explain its slow growth. Perhaps a relic of past industrial policy, Missouri’s industrial make-up today is weighted too heavily toward non-growth industries. The mix of industries has proved to be a drag on the state’s past economic growth.

Of the several sources contributing to Missouri’s stagnant growth, Gronberg et al. argue that the most important is the fact that productivity in Missouri—output per worker—increases at a much slower rate than the national average. This poor productivity record stems from two sources. One is problematic trends in labor force quality. Here the authors find that a key factor is a lack of commitment by the state to a higher educational system that produces a sufficient number of college-educated individuals. This theme reappears in the following article.

Another major source of Missouri’s slow growth is that the state does not attract well-educated individuals from outside the state, but induces domestic residents to leave for better opportunities elsewhere. This combination is detrimental to economic growth and to the state’s economic future.

Based on their analysis, Gronberg, et al. conclude that Missouri needs to increase the productivity of its workforce. This is best achieved by improving the education of residents and by attracting better-educated workers from other outside the state.

The second study, “Missouri’s Economic Future Lies with School Reform,” by Eric A. Hanushek, concludes that Missouri’s lackluster growth is largely a function of its educational system. Even though Missouri schools graduate students at about the same rate as the national average, too many of them lack cognitive skills acquired by graduates in other states. This observation comes from comparing scores on standardized tests like the National Assessment of Educational Progress (NAEP). Research indicates that such scores are a robust predictor of future economic success, better than average years of schooling or degrees acquired. Using results from the NAEP, Hanushek finds that Missouri students lag those in most other states. This means that the average Missouri student entering the workforce is less able to meet the challenging requirements of the modern workplace.

Hanushek also finds that those students who have acquired these cognitive skills are more likely to migrate to other states to seek better economic opportunities. This “brain drain” has been and will be detrimental to Missouri’s growth prospects. Because those who remain in the state are relatively less capable, productivity growth—a key element in higher rates of economic growth discussed in the Gronberg, et al. study—will suffer, and so will economic growth. It also is detrimental to future growth prospects because a less-skilled labor force will not attract those industries relying on an educated workforce.

Hanushek concludes that the strength of the Missouri economy rests largely on current students who will become the backbone of the state’s labor force. Improving the quality of schooling is a difficult task but one that demands immediate attention. Simply increasing funding for schools, an oft-proposed solution, is unlikely to increase academic performance. More attention must be paid to how money is spent. Hanushek argues that the key lies in improving the quality of the teachers and school administrators. Salaries and incentives for those personnel should be better related to student performance. Improving the educational outcome of Missouri’s school system will occur only when the existing incentive structure is changed.

Michael Podgursky, the author of “Reforming Educator Compensation,” provides a more detailed study of issues facing Missouri teachers and administrators. This includes how they are compensated, but also more nuanced factors, such as the teacher retirement system and the incentives faced by administrators. Podgursky identifies several key inefficiencies of the teacher compensation system in Missouri and provides principles for reform. In Missouri, as in many other states, compensation accounts for roughly 90 percent of K-12 instructional costs. The problem, Podgursky argues, is that there is little evidence of efficient or strategic design in these compensation systems. Rigid salary schedules reward factors that are too often unrelated to effectiveness, induce shortages in various fields of study, and encourage inequitable allocation of professional staff.

“Some teachers,” he notes, “are harder working and elicit greater effort from students than others, while other teachers may be ‘burnt out’ and simply putting in time until retirement.”  The current single salary schedule “suppresses differences between more effective and less effective teachers.” In Missouri, Podgursky finds that “the level of average teacher pay is determined by the decisions of school administrators, who through their actions seem to favor more rather than better remunerated teachers.”

Podgursky proposes several important reforms. One is to increase accountability on student learning. Another is to provide what he calls “regulatory space” for experimentation. Where possible, school district administrators (and charter school leaders) should have the opportunity to experiment with alternative compensation policies in order to improve teacher quality and enhance the educational outcome for students. Lastly, Podgursky argues for improved training and selection of school administrators. As leaders in the educational industry, administrators must become more cognizant of, and able to implement, compensation programs that raise incentives for high-quality teachers to remain in the classroom.

After reading the articles in this collection, you will agree that the economic and social cost to Missouri—to its residents—of not undertaking fundamental changes in the state’s educational system are too pressing to ignore.

The State of the Missouri Economy and Workforce

Missouri’s economy has hardly grown over the past twenty years. Perhaps one of the most important observations is that productivity in Missouri—output per worker—is lower than the national average. Poor productivity growth stems from two key sources. One is problematic trends in labor force quality. A key factor is a lack of commitment by the state to a higher educational system that is capable of producing a sufficient number of college-educated individuals. The other is an environment that does not attract well-educated individuals from elsewhere, but induces domestic residents to leave for better opportunities. Missouri needs to produce a more highly educated work force and create more jobs for these productive and highly educated workers.

By Eric A. Hanushek

Between 1970 and 2007, Missouri’s growth in income per capita was 41st in the nation. This dismal outcome is largely a function of its educational system. Its schools have not been competitive, either among the US states or internationally. Lifting the quality of schools will, by the historical evidence presented here, produce large long-run gains for Missouri’s economy.  Even though many youths have in the past migrated to other parts of the country, the strength of the Missouri economy will continue to rest mainly on those current students who will become the backbone of the future labor force. Improving the quality of schools is a difficult task that demands policy attention. Simply increasing funding for schools, one oft-proposed solution, is unlikely to lead to increased academic performance unless more attention is given to how money is spent. The key to improvement lies in the quality of the teachers and leaders in the schools. Salaries and incentives for these personnel have not been directly related to student performance. If improvements are to be realized, existing incentives must be changed.