Vol. 6, No. 1 - The Confluence - A regional studies journal published by Lindenwood University Press.

The most striking stained glass window at St. Mark's features bayonets of three soldiers with Hitler mustaches slice through a money bag. This window reflected man's modern betrayal with "his lust for power as portrayed by soldiers blindly following." The money bag symbolized the lust for self-interest and wealth. Robert Harmon designed a divided vine that ran up the window. The vine grows crossbones, bullets and a skull, with bolts of lightning to illustrate the price of the hunger for power and for riches, born of self-love. 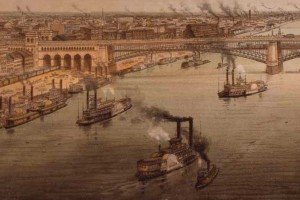 Creative Destruction in the Antebellum Marketplace: St. Louis Merchants and the Railroad Boom of the 1850s

The 1850s was a time of great change for merchants in St. Louis. Railroads were moving in and with them came greater business competition. Commercial organizations such as the St. Louis Merchants Exchange came about to try to stabilize the marketplace. However, even these groups were unable to protect the market from the qualms and tribulations it would face. 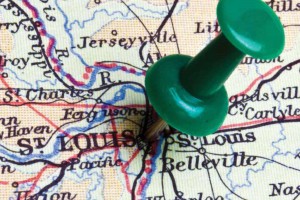 In the wake of the summer’s events, the discussion about race in American cities has accelerated. In this important article, Posey and Ricchio present their findings on how St. Louis stands in relation to other cities on key issues surrounding race. 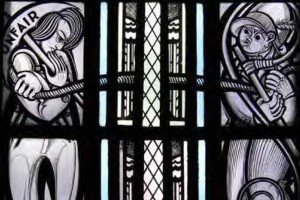 The stained glass windows of St. Mark’s Episcopal Church became a controversy among St. Louisans in the 1930s with their politically charged depictions, which were the brainchild of one man, Bishop William Scarlett. Windows depicting all-too-familiar scenes are paralleled with contemporary ones, but they may not be the ones you would expect. 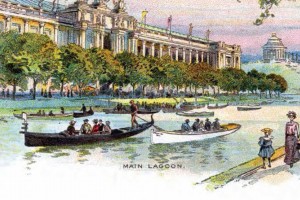 The World’s Fair, Pruitt-Igoe, and the Myths of Modernism

The 1904 World’s Fair and Pruitt-Igoe, a public housing project, are clearly defined in St. Louis history, one as being possibly the best event to take place in St. Louis and the other as the most epic of failures for the city. Here they are examined and the mythical promises of civic growth they both displayed. 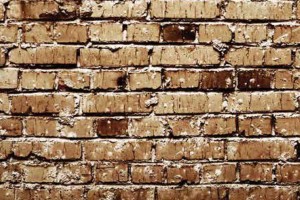 The Life of Archer Alexander: A Story of Freedom

Follow the story of Archer Alexander and his road to freedom that started with exposing a neighbor for supporting the Confederacy, a risk that resulted in the ultimate freedom for himself and his family. It is a moving story of dedication and hope that took place in the region.