Vol. 9, No. 1 - The Confluence - A regional studies journal published by Lindenwood University Press.

The articles in this issue of The Confluence are particularly timely. Three of them address racial heritage, suggesting ways that heritage shapes our contemporary region.

Two of the essays examine the racially motivated riot in East St. Louis in 1917, which was commemorated this past summer. Samanthé Bachelier’s fine scholarship examines the ways it was described, by everyone from St. Louis Post-Dispatch reporter and eyewitness Carlos Hurd (who, incidentally, also wrote the first eyewitness account of the sinking of the Titanic, since he was aboard the Carpathian, the ship that rescued survivors) to people like W.E.B. DuBois and coverage in The Crisis, published by the NAACP. In a similar vein, Lou Robinson takes a fascinating look at the subtleties of descriptions of women as an effort to discredit them, consciously or not. The use of descriptions of attire were coded messages, Robinson asserts, that shaped people’s responses to them. We’ve heard a great deal about this in our own lives, of course, regarding the “uniforms” of white nationalists in the aftermath of the Charlottesville protests.

But the roots run deeper. Kenneth Winn introduces us to a compelling account of the notable and nationally prominent abolitionist Thomas Wentworth Higginson and his visit to St. Louis. Admittedly, visiting the city and a slave dealer was not the purpose of his trip—he was traveling to Kansas in 1856, with a stopover in St. Louis—but it is nonetheless a fascinating aspect of his journey and the record. Seeing the experience of enslaved people being sold through the eyes of a New England abolitionist gives us a fresh view of the debate over the so-called “peculiar institution” as the cause of the Civil War.

We are also pleased to be publishing the work of the recipient of the annual Morrow Prize, presented by the Missouri Conference on History. This prize is granted to the best student paper on a Missouri topic presented at its annual gathering in March. Student work such as this paper by Tanya Jones can offer new insights and interpretations. A committee of scholars select the paper. In full disclosure, I don’t serve on that committee, but I’m proud to say that Ms. Jones is a graduate of Lindenwood; this is her senior seminar paper. It’s interesting and very good. We’re proud of her.

By the way, a related note: Back in spring 2011, we published a special issue of The Confluence commemorating the 150th anniversary of the Civil War. That issue included an article by Patrick Burkhardt examining the efforts to erect a Confederate monument in St. Louis—the one taken down this past summer. You can read it on our website; the title is “The Lost Cause Ideology and Civil War Memory at the Semicentennial: A Look at the Confederate Monument in St. Louis.” 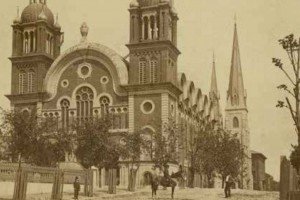 Tanya Jones explores the role of the Reform movement to blend American identity and Judaism in the Gilded Age, using St. Louis as a case study. This essay is the winner of the 2017 Morrow Prize, presented annually by the Missouri Conference on History for the best student paper on a Missouri topic presented at its annual conference in March. 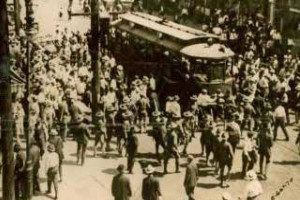 Hidden History: The Whitewashing of the 1917 East St. Louis Riot

A bloody riot erupted in East St. Louis in the summer of 1917 that resulted in the massacre of dozens of African Americans. Bachelier argues that the history of the history of the riot is also telling about views about race both at the time and since. 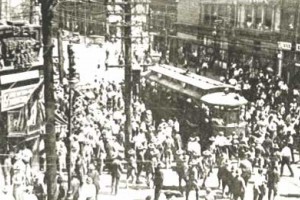 What Not to Wear to a Riot: Fashioning Race, Class, and Gender Respectability Amidst Racial Violence 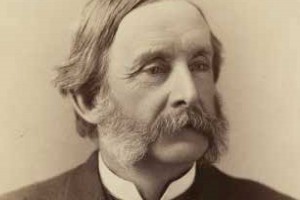 When the crisis in Kansas over allowing—or banning—slavery in the territory erupted in 1854, it became a symbol of the cause for both southerners and northern abolitionists. Noted abolitionist Thomas Wentworth Higginson traveled to Kansas in 1856. On his way, he stopped in St. Louis and visited a slave auction. Kenneth Winn introduces Higginson’s account, reprinted here.