Senior Earns Internship with US Ski and Snowboard Olympic Team 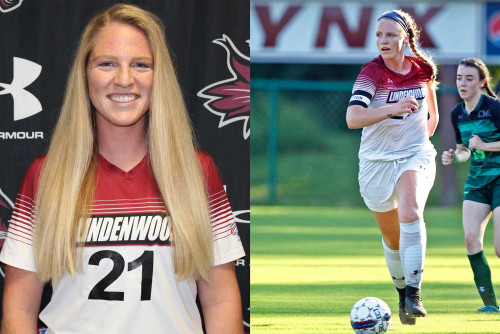 The Lindenwood University-Belleville Athletics Department is excited to announce that senior Maddison Beck, St. Louis, Mo., of the Lady Lynx soccer team has earned a summer internship as a strength and conditioning coach with the United States Ski and Snowboard Olympic Team.

An exercise science major from Webster Groves, Mo., Beck transferred to Lindenwood Belleville in 2016 as a sophomore and played three seasons with the women’s soccer team. Throughout her career as a defender, Beck has recorded 13 goals and 29 points through 56 games with the Lady Lynx, earning herself the title of team captain her senior year in 2018.

Beck also coordinates the off-season workouts for the team, and is the president of the Student Athlete Leadership Team, promoting leadership opportunities and diversity throughout the athletic program. She is also a two-time academic all-conference nominee and an NAIA Daktronics scholar-athlete who will graduate in May.

“I knew that I wanted to go the route of the strength and conditioning part of athletics over the last few months leading up to graduation,” Beck said. “The trainer I have been shadowing at my gym brought this internship opportunity to my attention. Since I love the outdoors and exploring different aspects of athletic training, I said, ‘why not?’”

Beck will be working at a training facility in Park City, Utah, as a strength and conditioning coach from the end of April to late August.

“The opportunity presented itself, and I couldn’t be more excited, because this is exactly what I wanted,” Beck said. “The internship is a good mix of what hobbies I enjoy doing and what I love doing with my major.”

Beck will begin her internship in just a few weeks, working with the best athletes that the United States has to offer with the Ski and Snowboard Olympic Team.