Arthurian Legend Opens Doors For Creativity In The Classroom 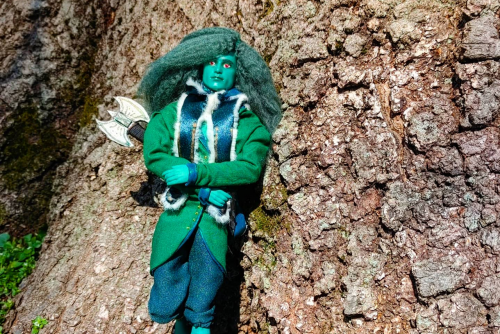 Lindenwood University has always encouraged students to think outside the box when it comes to schoolwork and other academic projects. While taking an Arthurian Legends class, Lauren Paulin was given the choice of a creative project and ran with it. For her project, she created a doll of Bertilak, the Green Knight from the story of Sir Gawain and the Green Knight. The specific translation of the story was written by J.R. Tolkien. The Arthurian Legend is essentially the chronicles of King Arthur, the legendary king of Britain, and his Round Table.

Paulin was able to incorporate a lot of her skills from painting to research to sewing in order to make this project her own. When referencing her project, Paulin stated,“My project is based on a Middle English text from the 14th century entitled Sir Gawain and the Green Knight, translated by J.R. Tolkien. This doll was based on one of the titular characters, the Green Knight, as described in the text.” She went through a lot of different levels of research for the outfit, weapons, the overall make of the doll and any other details of the legend to make sure that they were correct. This was a very long and grueling process that took Paulin many days and hours to complete. But at the end, she knows that it was worth it because she was able to make something that represented her and showcased her talents and skills.

Being a theatre major, Paulin is not a stranger to thinking outside the box and really diving into roles and texts. She states, “No matter the role I’ve had in the creative process in shows, it’s always been ingrained in me to do thorough research and have a clear understanding of characters, settings, costumes, etc. based on how they are described in the source material.” She knows that in both the classroom and in life, there are no shortcuts. Paulin feels as though the faculty at Lindenwood has always given her a creative outlet and has been supportive in helping her to express herself in projects. Because of this support, Paulin feels as though she is doing this more for herself and less for a grade. That makes the reward much more sweet in the end.