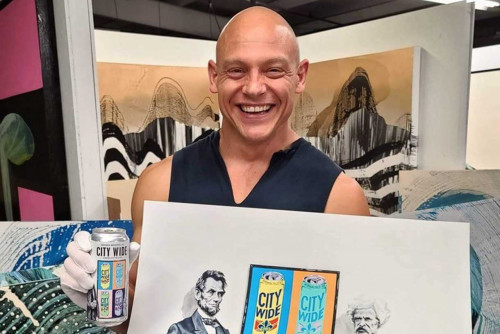 In a new partnership with 4 Hands Brewing Co., Lindenwood BFA alumni Mitch Bierer and Zach Smithey currently have their art featured on beer cans from the St. Louis brewery. These limited-edition products are available in stores now.

Bierer earned his BFA in Studio Art with an emphasis in painting and drawing in 2011. Smithey graduated with a BFA in Studio Art in 2006 and a master’s degree in education in 2009. Their art is mesmerizing, and they often share their stunning works on their social media pages. This is how Kevin Lemp, the owner of the brewery, found them; impressed with their talent, he invited them to participate in the beer can design campaign after following both of their careers online for years.

The artists have made good use of their Lindenwood degrees since graduation. Bierer currently lives and works in San Francisco, and he is best known for his bright murals, often made with spray paint, comprised of frenzied streaks that come together to form powerful images. Smithey works as an interdisciplinary artist in the St. Louis area. A prolific creator, his pieces have been featured in a vast array of exhibits. Smithey even designed his own home, which was featured in Netflix’s Amazing Interiors in 2018.

John Troy, senior professor of studio art, instructed the artists during their time at Lindenwood and is proud of their success. He explains, “This is another example of artists melding the creative and commercial: earning a good living by utilizing their gifts and doing what they are best at.” Though some people say it’s nearly impossible to create a successful career in art, Bierer and Smithey are flourishing, leaving their mark on the world and making their alma mater proud. Troy states, “Mitch and Zack are just 2 of our many creative alumni enjoying success while doing what they want to do. Lindenwood's BFA in studio art (now art & design) programs have continually prepared students for success in the field.”