Home
About
News
Lindenwood Helps Bring the Band Back Together

Lindenwood Helps Bring the Band Back Together 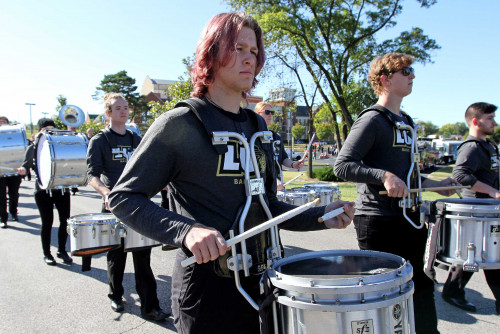 In a move that benefits both its own students and the greater St. Louis community, Lindenwood University recently donated a large portion of its band equipment to Madison High School in Madison, Illinois.

According to Professor Matthew Hoormann of Lindenwood University’s band program, the equipment included around a hundred marching uniforms as well as many snare, tenor, and bass drums. The donation, having been finalized in late September, comes months after Lindenwood worked to purchase specially-designed marching uniforms and other new instruments for its own band program. While university students are already benefiting from this deal and the new drums it brought them in mid-August, so, too, are the high school students benefiting from the donated equipment that was shipped to Madison High School on Monday, September 28.

For the students of Madison, Illinois, Lindenwood’s contribution to the band program has proven to be invigorating. Even by Wednesday, September 30th, students had been fitted into their new uniforms and rehearsed with the donated equipment. “They were excited and loved the new drums and the quality of the equipment,” said Professor Bernard Long Jr., who helped to organize the donation and works for the band programs of both Lindenwood University and Madison High School.

Yet this action by the university means something more for the high school of Madison, Illinois, since this is the year that its band program is, as Professor Long put it, “revitalized for the first time since the early 2000s.” It allows the 30 band students there -- who alternatively might only have been able to obtain new equipment  through fundraising or a purchase by the high school -- to participate in the Metro East Music Celebration in mid-October 2020. For this sort of reason, it seemed only natural to the band faculty at Lindenwood, who already intended on donating to either a rural or financially challenged area, that Madison High School would be an appropriate fit. Additionally, Professor Long stated that he expects the donation to help the high school students strengthen their “leadership and musicianship” in the coming experiences made possible by the new equipment.

On Lindenwood’s side, however, the decision to donate also stemmed from a sort of revitalization of its own program. Currently including around 100 students, the university’s marching band continues to grow in spite of all challenges, and the need for new and improved equipment grows right along with it. Having spent the past couple of years wearing simple yet sharp black pants and band shirts to its events, the program also found itself in need of new uniforms. As a result -- and even in spite of the Coronavirus pandemic -- band faculty at Lindenwood went to work with their Deans and even University President Porter to allocate the funds necessary for purchasing updated equipment and uniforms.

Their hard work began to pay off when the drums, though delayed by the current pandemic, arrived in mid-August. Similarly, despite also being delayed due to COVID-19, the special uniforms are slated to arrive sometime before the end of 2020. With all of this new and improved equipment available to the marching band at a time when its live event schedule has largely been wiped clean, high hopes still prevail. “I feel like it allows us to reclaim a sense of pride,” said Professor Hoormann while discussing the incoming uniforms and their important role in promoting the university’s arts programs. “It’s an arm of Lindenwood outreach that we haven’t utilized too much. As soon as we can, I want to get us out there in front of more people in the community.”