HOME
About
News
Lindenwood Shines Again at National Conference!
About NAVIGATION
May 31, 2022 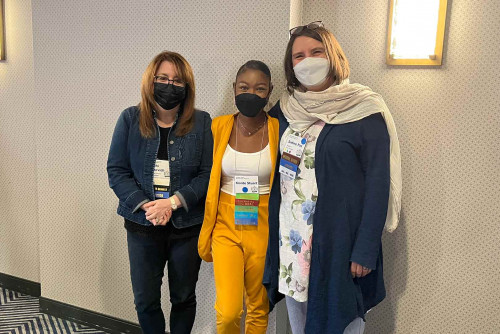 Lindenwood University’s faculty and students were showcased at the 2022 National Alpha Chi Convention, which took in April in Austin, Texas. Active on nearly 300 campuses nationwide, Alpha Chi chapters induct approximately 10,000 students annually. Its national conventions bring together faculty advisors and student presenters from around the country. This year’s convention celebrated the organization’s centennial.

In addition, the National Council expressed great appreciation to its outgoing Executive Vice President, Dr. Kathi Vosevich, professor of English and dean of the College of Arts and Humanities. Dr. Vosevich was recognized with the prestigious Distinguished Service Award, a regionally nominated award given out at the convention each year. Only one faculty sponsor per year is nominated by an Alpha Chi region. Dr. Vosevich was also elected to Alpha Chi’s Region IV office of Vice President with Professor of English and Honors Academy Faculty Sponsor Dr. Justine Pas, Region IV President.

Lindenwood University’s academic skills were also featured at the national convention’s scholarship and fellowship gala. Each year, Alpha Chi awards scholarships and fellowships to student members who submit their work to a rigorous, national competition. This year, Anna Ostmann, a double major in English and historical studies and a double-minor in secondary education and French, was awarded the H. Y. Benedict Fellowship. The Benedict Fellowship, which honors the society’s first president, Dr. Harry Benedict, is for the first year of graduate study. Anna’s winning submission, “Building Bridges: A Discussion of Foreignization in Translation,” combined creative writing and scholarly research. Anna’s insights about literary translation were informed by her own original and creative work as a translator of a fragment of Molière’s 1666 Le Misanthrope.

“Anna located her work as a translator within a lively scholarly debate,” Dr. Pas said. “And her project shows a mature writer whose bilingualism and familiarity with scholarship are at a graduate program level.”

“Lindenwood’s value proposition centers on real experience and real success—which goes hand in hand with our success in this national honors organization and the valuable experience that it provides for our students. Together, we help our students to do well and to do good,” Dr. Vosevich said.

Alpha Chi was founded to promote and celebrate achievements of college and university students who are encouraged to “make scholarship effective for good.” The organization invites to membership juniors, seniors, and graduate students from all disciplines in the top ten percent of their classes. Members can take advantage of scholarship and fellowship competitions, as well as submit work to Aletheia, the organization’s scholarly, peer-reviewed publication of undergraduate research. Students in Alpha Chi can also present their research to scholars from around the country at the annual national convention. Lindenwood’s Alpha Chi Pi continues to be the largest honors organization on campus, inducting to membership over 100 students each semester. In 2020, Alpha Chi Pi won the organization’s most prestigious national prize, the President’s Cup, in recognition of its academic events, service initiatives, convention participation, social media initiatives, as well as undergraduate publication in the society’s journal, Aletheia.