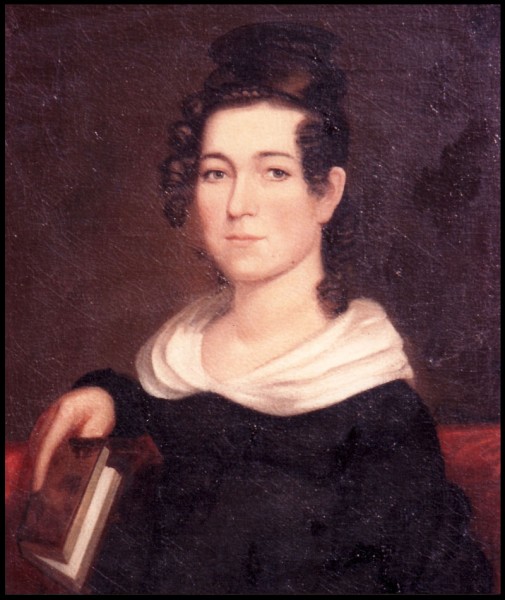 Mary Sibley was born in Rome, New York on January 24, 1800, the daughter of Rufus Easton and Alby Smith Easton. She was the first of eleven children for the Easton family. In 1804, Sibley’s father was appointed territorial judge of the Louisiana Territory by President Thomas Jefferson, making it necessary for the family to follow in his stead to St. Louis. In addition to her father's duties as judge, President Jefferson asked Easton to keep an eye on the Territorial Governor, General James Wilkinson, because he was suspected of collaborating with Vice President Aaron Burr to cause the western part of the United States to secede and form a separate country.

While little is known of Sibley’s early life, family records state that for a period she was sent to boarding school in Shelbyville, Kentucky.

According to Sibley’s diaries, sometime prior to 1815 she had returned to her family in St. Louis, Louisiana Territory. It was during this time that she would frequent dances with her friend. The details of this period have mostly been lost to history, but it is assumed that it was at one of these dances that Mary met her husband George Champlin Sibley. They married on August 19, 1815. Due to George's duties as the factor (trade superintendant to the Indians), the Sibleys quickly returned to Fort Osage near present day Kansas City, Missouri.

Once at Fort Osage, George kept busy trading goods with the Indians and negotiating treaties for the United States. Records during this time period scarcely mention Mary; however, several biographers believe that she began her interest in teaching when she noticed that the few area children were not receiving an education. Mary remained with George at Fort Osage until the United States closed it in 1822. Between 1822 and 1825, George was the Postmaster General for the area, along with trying unsuccessfully to start up a privately owned trading post. When the trading post failed, George found work as the lead commissioner, which surveyed what became known as the Santa Fe Trail. This kept George away from Mary for much of the time between 1825 and 1827. Not much is known about Mary during this period.

When work on the Santa Fe Trail ended, the Sibleys decided to move to Saint Charles, Missouri in 1827. Early in Missouri’s statehood (which in 1821 established its first capitol in Saint Charles), Mary’s father, Rufus Easton, was the second Attorney General for the State. After the capitol moved to Jefferson City, the Eastons remained behind in Saint Charles. George owned land in Saint Charles, which he had purchased in 1814 when he temporarily moved east during the War of 1812. Because of the numerous Linden trees on this property, the Sibleys named the property Linden Wood. While George cleared the land for farming, the couple lived in town until a home was built on the property in 1829.

According to Sibley’s diaries, she grew up in a home where religion was inconsequential. This view toward religion lasted until the early years of the Second Great Awakening, after which she became an ardent Old School Presbyterian. Through Mary’s influence, George was converted a few years afterward. Due to the preeminent role of religion in the Sibleys lives, Mary incorporated her faith into her continued interest in educating the area youth. She writes in her diary about schooling the children of newly arrived German immigrants using a bilingual Bible to teach English. Additional attempts at education were made with the region’s slaves, but as fearful slave-owners worried about a potential rebellion from enlightened blacks, Sibley was quickly forced to stop. Ultimately, the Sibleys faith was the focal point of the women’s college they opened and named after their property, Lindenwood College (today known as Lindenwood University).

The Development of Lindenwood:

In 1827, as the Sibleys settled in Saint Charles, Mary started a small school in town, first teaching her sister, Louisa, and a few town girls from her home. By 1831, a log cabin was built at Linden Wood, specifically to house twenty boarding students from further away, as well as to create additional classroom space. As finances became tight for the college in 1843, Mary traveled to the east to raise money. She succeeded in raising approximately $4,000, enough to keep the school in operation. When the Sibleys were older and looking to retire, in 1856, they deeded the college to the Presbyterian Church.

After her husband George died in 1863, Mary sold her house and moved to St. Louis. Between 1866 and 1869, Mary joined an organization created by a prominent St. Louis philanthropist, James E. Yeatman. The organization, named The House of Bethany, was restricted to women who served the needy by providing food and medical care while promoting their Christian beliefs. Once the House of Bethany closed in 1869, Mary moved back to Saint Charles, living in a house near the edge of the Lindenwood campus. Near the end of her life, Mary became involved in the Second Adventist movement, which originally felt that Christ would return in 1844, but turned into an organized denomination when they were disappointed. In 1873, Mary received a letter from a Japanese man named Isaac K. Yokoyama who requested that she send educators to Japan who could also spread Christianity. At the age of 73, Mary took it upon herself to serve as a missionary/educator. Mary left from New York City by boat down to Panama, crossed the isthmus, and traveled up to California, but before she left the United States she realized that the journey would be too hard on someone her age and returned to Saint Charles.

On June 20, 1878, Mary Sibley passed away at the age of 78. She is buried with her family in a cemetery located at Lindenwood University.