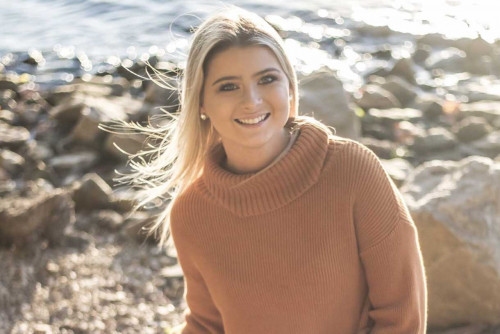 Recent Lindenwood University graduate Samantha Goewert is defying the odds as she follows in the footsteps of mentor and former professor at Lindenwood, Dr. Sara Bagley. Goewert is a graduate student at Saint Louis University (SLU) and is part of their experimental psychology program with a concentration in cognitive neuroscience. This is the same program that Dr. Bagley received her masters and doctorate degree from SLU as well.

Goewert took part in Dr. Bagley’s research lab for four consecutive semesters while she was at Lindenwood and feels as though it really helped her with her studies and with getting her to where she is today. “Joining her lab seemed like the best fit and was proven through the many research projects we worked on in the lab. Working in Dr. Bagley’s lab not only provided me with excellent research experience, but I was genuinely excited to utilize research to attempt to answer many questions we had about cognition.” Goewert feels that working in those labs ultimately solidified her choice of study.

During Goewert’s time at Lindenwood, she won the School of Sciences Zanville Writing Award (2018), won the Endowed Lindenwood Psychology Award (2020), was a member of Alpha Chi and of Psi Chi, and was an Honor’s student with a 4.0 GPA. Goewert did all of this while raising a 5-year-old son.

Not only is Goewert following in the footsteps of Dr. Bagley, but she is also forging her own path with plans and studies of her own. “Currently, I am working on a few different research projects, one of which focuses on how strategy use during learning and recall affects memory performance. In the future, I plan to pursue a career in academia and continue research in the field of cognitive neuroscience.”