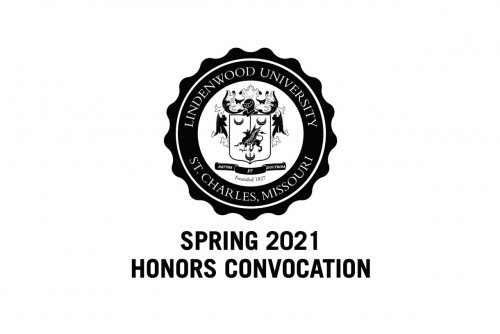 On April 15, the Lindenwood University School of Humanities held its annual Honors Convocation ceremony to recognize students’ academic excellence in a virtual format. Award recipients, family, friends, and faculty attended the joyous event to celebrate the end of another successful year of studies. The ceremony was hosted by the school’s distinguished dean, Dr. Kathi Vosevich, who praised the recipients’ scholarly dedication. At the start of the merriments, she stated, “We’re very excited to be here with you and give you the recognition and the celebration that you absolutely deserve for all of your hard work.”

Many of the university’s top awards were earned by School of Humanities students this year. Lindenwood President Dr. John R. Porter announced the winner of the Sibley Award, named in honor of university founder George C. Sibley, which goes to a senior student who demonstrates strong leadership and service to the university and community while maintaining a record of academic excellence. This year’s recipient was Malachi Cecil, a student triple-majoring in international relations, Spanish, and political science with minors in French and Chinese. During his time at Lindenwood, Cecil co-founded the university’s chapter of the John Quincy Adams Society, completed an impressive internship with Refugio ministries, and maintained a near-perfect GPA.

Porter also presented the Easton Award, named in honor of Lindenwood University founder Mary Easton Sibley and given to a senior student who exhibits exemplary achievement by successfully pursuing excellence in their academic and extracurricular activities. This award went to Gabriela Rodriguez Trejos, who studies international business and political science at the university. Rodriguez Trejos has remained deeply involved on campus throughout her Lindenwood journey; she has been an assistant area coordinator, community advisor, president’s ambassador, and active member of the Lindenwood Honor Society, and she has served in a leadership role in Lindenwood student government. She has also been involved with the International Student Fellowship and participated in the United States Hispanic Leadership Institute Conference.

Dr. Dale Walton, program chair and associate professor of international relations, announced the Ryan Guffey International Student Award, an honor bestowed upon an international student who has shown exemplary academic achievement and made exceptional contributions to campus life at Lindenwood. Senior Jorge Oliveros earned this distinction, and Walton explained, “Jorge Oliveros is a model of a student who’s deeply engaged in both the university community and the wider world.”

Oliveros is completing his degrees in international relations, international business, and political science, and he has accomplished quite a lot in his four years at the university. He co-founded the Lindenwood chapter of the John Quincy Adams Society with Cecil and has served as the vice president of Lindenwood’s Honor Society, a senator representing the School of Business in the Lindenwood student government, and as a president’s ambassador, in addition to being a member of many other student groups. He is a student athlete on the water polo team, which has won national championships during his time at Lindenwood. Further adding to this impressive record, he has served as a community advisor, an assistant area coordinator, a student assessment scholar, and an intern with the Office of Institutional Effectiveness. In addition, he has engaged in immigration communication and outreach with the World Trade Center St. Louis and held other jobs and internships during his time as a very busy Lindenwood student.

The Rose Lyn Zanville Leadership and Character Award was presented by Brita Mathre, a former recipient of the honor, to Patrick Huck. This distinction goes to an interdisciplinary studies student who has contributed to the field of international and global studies by demonstrating excellence in leadership and character, producing an empirical research study in the fields of leadership and ethics, or developing a leadership and character initiative to make a difference. The award is given in honor of Rose Lyn Zanville, Ph.D., by her sister Holly Zanville, Ph.D., both graduates of Lindenwood College for Women. Huck has maintained a 4.0 GPA during his time at Lindenwood while also working full-time for Enterprise as a director of IT. During his Lindenwood career, he has used this work experience as inspiration for his academic research about the changing landscape of middle management.

The Schoenhard American Heritage Award was presented to Thomas Burtelow by political science professor Jeanie Thies, who explained, “Thomas is an exceptionally bright, capable, disciplined student and possesses enormous potential. His hard work, character, and talent make him an outstanding choice for this award.” The honor recognizes outstanding achievement in the study of American values and character education as practiced through programs at the university. Thomas Burtelow balances his political science and philosophy studies with his rigorous ROTC training, maintaining a near-perfect GPA throughout his time at Lindenwood. Thies enthused, “Thomas is one of our top students and of the finest character. He is an ambitious, thoughtful, and empathic young man who exemplifies integrity. He is committed to making a meaningful difference in our world, and I have no doubt that he will do so.”

The faculty and leadership on the meeting expressed their immense pride in these phenomenal students during not-so-optimal circumstances. President Porter stated, “I’m really proud of how our faculty, staff, and students still made this a great year regardless of the pandemic and the obstacles in our way. The students really persevered and were flexible and adapted to learn in different modes. You made it through the year, and with real honors.”