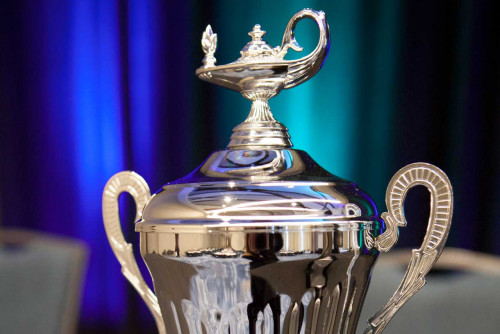 Last spring, the members of Lindenwood University’s chapter of the Alpha Chi National Honor Society were named national champions, winning the President’s Cup, the most prestigious award offered by the organization. This happened at about the same time that COVID-19 hit the U.S., and as the virus dominated the headlines, Alpha Chi’s major accomplishment went largely unacknowledged.

The Alpha Chi National Honor society only invites the best and brightest students to join its ranks, and each chapter is made up of juniors, seniors, and graduate students in the top 10% of their respective classes. Alpha Chi is also a service organization, and it offers members a wealth of benefits, including scholarships, chances for publication, leadership experience, and opportunities to go to the annual national conference. Each year, the esteemed President’s Cup goes to the chapter who for the last three years has contributed the most to academics and service at their university and in their local community. Lindenwood’s Alpha Chi chapter has tackled several notable projects in recent years, and their impressive service accomplishments put them a notch above the rest.

Last year, Alpha Chi made a big impression both on campus and off. Throughout the year, they put on resume writing workshops for students and supplied over 100 items to the university’s pantry for people in need. They also won a grant for Dark Carnival to put on a ghost story writing contest, after which they gave prizes to the winners and held a reading of the winning stories. For a community event, the organization put on a free screening of the documentary Screenagers, a film about this generation of students who have grown up with screens. Chapter members at Lindenwood have been known to be elected to the national student council for Alpha Chi, receive scholarships, and have works published in the organization’s peer-reviewed journal, Aletheia. However, all of these achievements make up only a fraction of what Alpha Chi has done at Lindenwood and beyond.

The chapter received a silver trophy and a banner for their accomplishment. Dr. Justine Pas and Dr. Kathi Vosevich, the co-sponsors of Lindenwood’s Alpha Chi chapter, were elated about the victory and its significance for the university. Dr. Vosevich explained, “For Lindenwood, I think it’s really important because it recognizes our academic strengths, and it recognizes that our students can compete on the national stage and win.” This victory was no small feat; the national honor society has about 300 chapters across the country, and in order to win the title, Lindenwood had to compete against several other schools, both large and small.

Lindenwood’s Alpha Chi chapter continues to thrive after gaining national recognition for their massive success, and they are looking to use the momentum from their victory to have yet another strong year. They hope to grow their presence on campus, and they want to continue to help members get published and earn scholarships. Furthermore, they plan to hold another writing contest around Dark Carnival, create a virtual community outreach event, and donate even more items to the on-campus pantry this year. Overall, the chapter hopes that their triumph last semester will push them to become an even stronger organization and do more good for their community.

Through this organization, Lindenwood has made a name for itself, displaying its students’ talent, compassion, and excellence on the national stage. Lindenwood’s Alpha Chi chapter has proven that it is a force to be reckoned with, and the community can expect the group’s members to continue making waves for years to come. Dr. Vosevich stated, “If our students can win scholarships to graduate schools, win prizes for convention activities, or get published, those are only great things that can happen to great future leaders, and that’s what it’s all about.”