Home
About
News
Finding Afro-Mexico: An Interview with Dr. Cohen on the Recent Publication of His Book

Finding Afro-Mexico: An Interview with Dr. Cohen on the Recent Publication of His Book 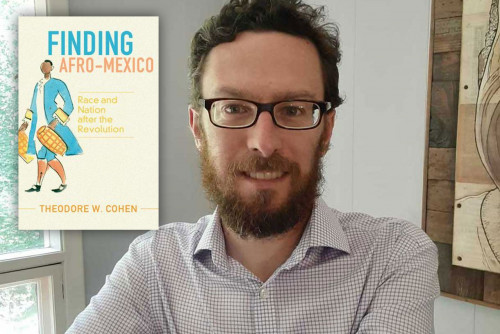 I recently had the opportunity to sit-down with Dr. Ted Cohen, a professor of History and Geography in Lindenwood’s Department of Humanities, to discuss his recently published book, Finding Afro-Mexico: Race and Nation after the Revolution. Dr. Cohen specializes in Latin American, Afro-diasporic, and Atlantic history and has put nearly two decades of research and dedication that have all come together in Finding Afro-Mexico. During our Zoom interview, we discussed the origins of his research, where it has been focused, and what his book is all about, as well as his feelings leading up to and after achieving this incredible milestone.

Amazon.com’s summary explains that Dr. Cohen’s book, “reveals the transnational interdisciplinary histories that led to this celebrated reformulation of Mexican national identity. It traces the Mexican, African American, and Cuban writers, poets, anthropologists, artists, composers, historians, and archaeologists who integrated Mexican history, culture, and society into the African Diaspora after the Revolution of 1910,” highlighting how Dr. Cohen, “persuasively shows how these intellectuals rejected the nineteenth-century racial paradigms that heralded black disappearance when they made blackness visible first in Mexican culture and then in post-revolutionary society.”

When asked how he personally would describe his work, Dr. Cohen put it more simply, explaining that, “it’s a book about how African identity became part of modern Mexican national identity and what that means for Mexico […] and for the rest of the African diaspora.” In the course of our conversation, it arose that his subject matter is not something that people generally consider, so I asked what had led him to study the African diaspora and Mexican national identity that would eventually become the focus of his book. He told me a story about a class he took in his sophomore year of college on modern Mexican history. The class, he said, “never mentioned anything about Afro-Mexicans whatsoever,” but after reading a book by José Vasconcelos “about how Mexico is going to be the future of all the world’s racial evolutions- and Latin America was as well” since they were a “combination of all of the world’s racial groups, including the African race.” At the time Dr. Cohen said it meant nothing to him, but he eventually came to realize that Mexico’s African heritage had to come from somewhere and asked himself, “why didn’t we study this in my Mexican history class?” These questions are what drove his graduate research, his work slowly developing from a social history of African-descended peoples to the study of what their identity looked like. This was the foundation of first his dissertation and later his book.

After nearly two decades of research and hard work, finishing his dissertation in the Spring of 2013 and beginning the publication process in 2017, Dr. Cohen’s book was published by Cambridge University Press in April 2020. Knowing how much of his life was put into this research and the amount of time, effort, and dedication that have culminated in Finding Afro-Mexico, I had to question him about how he was feeling in those last months before publishing and what it was like once it was it was out there in the world.  He said it was, “one of the weirdest feelings in my life,” and told me- prefaced by the disclaimer that he is “an adult with no child-” that he “thinks this has to be like sending your kid off to college and coming home to an empty nest.” As he went on to describe how long this project has been a part of his life, it was clear that the comparison fit. “I had been with this project and this book since I was an undergrad… and it went with me through so many trips, though getting married- my wife never knew me previous to this project. And then to be like: it’s going to be done, and I can’t change anything about it,” he explained. Dr. Cohen has raised this project and developed his work into something that scholars- be they students, teachers, or others- learn from, and I think that the result is something to be proud of.

To conclude our conversation, I asked Dr. Cohen what advice he had for those who are or will one day be in the process of publishing their work. He told me two pieces of advice that I think most people- regardless of exactly what they are working on- will find helpful and encouraging: “follow your passion- if you’re doing something you genuinely love it’s going to be a better product. But the other part to it is… don’t expect perfection. Try to make it as perfect as you can, but if you try to make it literally perfect, you’re never going to be happy, and you’re never going to get it done.”