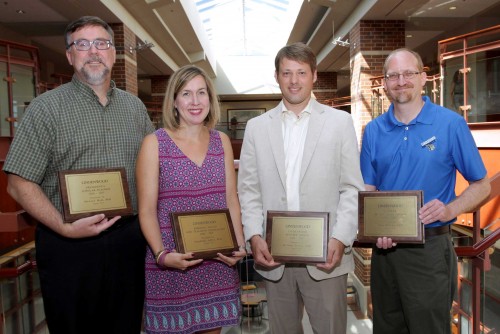 Lindenwood University in St. Charles has announced its faculty award winners for 2017. Along with the recently announced Adjunct Teaching Award, the faculty awards recognize accomplishments in a variety of areas, including service, teaching excellence, scholarship, and the blending of scholarship and teaching. Winners were Drs. Geremy Carnes, Stephanie Afful, Dale Walton, and Howard Wall, respectively.

The winners were announced at a recent faculty meeting and will be honored at an upcoming reception.

Carnes won the Lindenwood Service Award, which is presented to the full-time faculty member who has exhibited the highest level of service to and promotion of Lindenwood University. Carnes, an assistant professor of English, has taught at Lindenwood since fall 2016 and was recognized for his work on the Faculty Council and various task forces and committees within it.

Afful, an associate professor of psychology, won the Emerson Award for Teaching Excellence. A member of the faculty since 2014, Afful was recognized for implementation of student-centered assignments and activities and the incorporation of examples and activities from real life. Additionally, she was recognized for incorporating service learning into her courses, allowing students to maximize critical thinking and problem-solving skills while developing civic engagement.

The Scholar of the Year Award was presented to Walton, an associate professor of international relations who has taught at Lindenwood since 2012. He was recognized for his extensive teaching, researching, consulting, and publishing experience. In the decade since he earned his doctorate, he has authored four books; published numerous chapters, essays, and reviews, received grants; presented at national conferences; and worked as a policy advisor.

Wall, professor of economics and director of the university’s Hammond Institute for Free Enterprise, received the President’s Scholar-Teacher Award. Wall is a prolific researcher and has appeared as a policy expert in numerous news outlets in the St. Louis and Kansas City metro areas. The award recognizes the merging of his professional scholarship with his teaching, in which his students are asked to perform data-based research on current issue questions. During his time as chair of the economics program, it has grown from a handful of students to nearly 100.

Nominations for all four awards are made by the faculty at large, who submit evidence and letters of support for their candidates, and the Faculty Council selects the winners. This year, 18 faculty were nominated, collectively, for the awards.