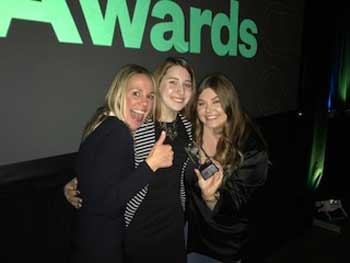 Before competing in the local ADDY Awards, Lindenwood students were tasked with a case study where they helped a real client solve real problems. The program is offered to universities who have an American Advertising Federation (AAF) student chapter. Students compete against teams within their district. These teams were made up of schools from Missouri, Iowa, Kansas, and Nebraska.

The competing teams all shared the common client - Wienerschnitzel. Wienerschnitzel is an American fast food chain founded in 1961 that specializes in hot dogs, also known as the World's Largest Hot Dog Chain. Wienerschnitzel locations are found predominantly in California and Texas, though others are located throughout the U.S.

Based upon research, Lindenwood students learned that people are misinformed about what ingredients are in a hot dog. For this reason, they were asked to show and tell them. Given this direction, the advertising and strategic communications students developed the ideas "What's in your wiener" and "Just Being Frank."

The campaign consisted of Weenie Wednesday (a pledge people take to eat hot dogs every Wednesday), a sponsorship with MLB (allowing street teams to have access to all home games), an airport mural, a movie theater quiz, billboards, various website landing pages and pop-up ads, Pandora ads, TV and radio ads, as well as digital advertising ranging across multiple platforms, such as Facebook, Snapchat, Twitter, and Instagram.