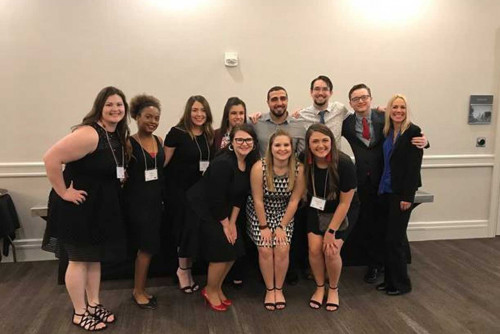 Two teams of Lindenwood University advertising students brought home a gold award and a silver award at the 2019 St. Louis ADDY Awards, which were presented by the Ad Club of St. Louis on Feb. 21 at Busch Stadium.

Students in Dr. Kristy Tucciarone’s Advertising Campaign Management class developed the Crayola campaign. The campaign’s message of multiculturalism would be shared with Crayola’s target audience, children, through vivid pictures while focusing on the cultural richness of the many countries around the world.

“I approached the students with the task of creating a multicultural campaign,” said Tucciarone, chair of the Advertising and Strategic Communications program. “The students offered several brands to me, which we analyzed for the brand’s ability to promote awareness and encourage a dialogue about multiculturalism.”

The Silver ADDY-winning entry was a year-long campaign that was initially created for the American Advertising Federation National Student Advertising Competition. This campaign was developed for Ocean Spray to show millennials that Ocean Spray products are relevant to them. The campaign included a hashtag, #Ride Your Wave, and a tagline, “Variety Throughout Your Day With Ocean Spray.” Team members on the Ocean Spray project were Tess Augustyn, Alex Marshall, Lauren Pennock, Hannah Saputo, graduate student Oday Alyatim, Evan Collins, Matt Hampton, Jessica Goddard, Andy Nicholson, and Caroline Wright.

Mike McCormick, CCO for Rodgers Townsend and St. Louis Ad Club Board member, took the stage during the ADDY ceremony to encourage those in attendance to continue to celebrate the advertising industry, singling out Lindenwood University in the process.

“Thank you to Lindenwood,” McCormick said. “You guys push harder than any other school.”

“Winning a Student ADDY is a true testament that these students are committed to their future success in the advertising and strategic communications industry,” Tucciarone said. “I truly feel blessed to work with such talented, passionate, and eager students!”