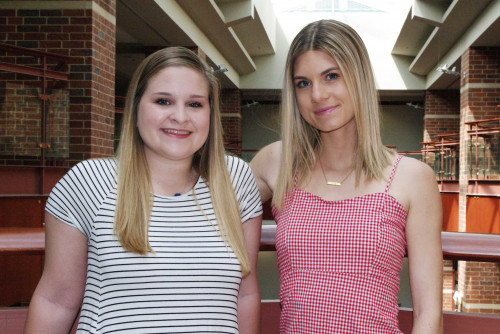 Lindenwood students Andrea “Andy” Nicholson and Alexis “Lexi” McCarthy are taking part this summer in the AAF-Ad Club St. Louis Internship Hop program, two of only five students selected for the paid program. During the program, the students spend one week each at eight agencies in the St. Louis area.

The team consists of account management, art direction/graphic design, copywriting, social media/content creation, and strategy. The nominations were open to junior- and senior-level students. During each week of the program, the team is given a project on Monday and is expected to complete it by the end of the week.

“The Ad Club St. Louis Internship Hop is a unique experience, because the interns will experience eight agencies, which means exposure to a variety of clients, work performed, employees/interpersonal relationships, and workplace environments,” said Dr. Kristy Tucciarone, chair of Lindenwood’s Advertising and Strategic Communications program. “In addition, the interns will complete the Internship Hop with eight completed projects, which they can showcase in their portfolios, thus making them more marketable for full-time employment.”

Tucciarone reports that McCarthy accepted a full-time job offer at one of the agencies as a result of her work during the program.

For their applications, the students had to submit their resumes with GPA, as well as statements of career aspirations, including why they were interested in the program. Applicants also had to be members of Ad Club St. Louis, which is part of the American Advertising Federation.