Lindenwood University alumnus Bruce Kintz, EdD, president and chief executive officer of Concordia Publishing House (CPH), recently announced that the company has been named a recipient of the 2011 Malcolm Baldrige National Quality Award. The St. Louis-based company is one of only four organizations in the country to receive the nation’s highest presidential honor for top performance through innovation, improvement, and visionary leadership. 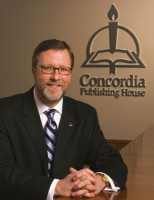 “It is with God’s grace that CPH has achieved a level of excellence that few major corporations realize,” said Kintz. “As a Christian organization we are humbled by our achievements, and as a thriving publishing house we are proud to represent both innovation and sustainability in this ever changing marketplace.”

Kintz earned a doctoral degree in education from Lindenwood University in 2009.