Home
About
News
Back from CNN Internship, Senior Embarks on Another Dream

Back from CNN Internship, Senior Embarks on Another Dream 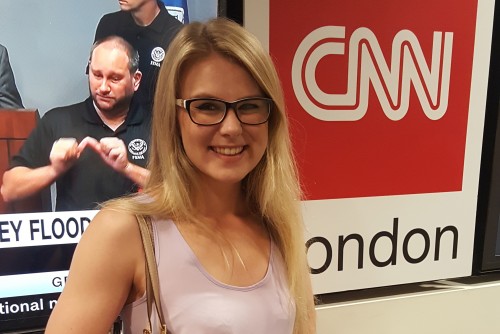 Essi Virtanen had a pair of dreams when she started her quest for a bachelor’s degree from Lindenwood University three years ago.

She checked one off her to-do list this summer when she landed an internship to work with media giant CNN International in its London office. She’ll complete the other this fall when she serves as student editor-in-chief of LindenLink and the Legacy.

“It’s been such an amazing experience,” said Virtanen said of her time in England. “When I was 16 years old, I came to London for the first time and decided it was my dream to work there. Later, after I came to Lindenwood and worked at the Legacy and LindenLink, it became my dream to be the editor one day. So, it’s been an amazing time for me, getting to accomplish my two dreams.”

While she was initially star-struck, finding herself in the CNN lobby in front of world-renowned journalist Christiane Amanpour, Vitrtanen quickly settled in and got to work. She said she largely focused on television production and research, getting a well-rounded look at the various jobs that have to be completed to take an idea from its conception to screens all around the globe. She was thrilled when she was offered the opportunity to do some reporting and writing. On Aug. 9, Virtanen published her first CNN feature story, a piece about Paralympic cyclist Karen Darke, who is riding a hand cycle across seven continents.

“It was very exciting to be able to do that story,” Virtanen said. “It’s something that I will remember my whole life. I’ll always have that byline”

Journalism professor Susan Weich said Virtanen’s experience at Lindenwood helped prepare her to land a prestigious internship but the student’s drive and passion made her opportunity a resounding success.

“From her very first class here at Lindenwood, Essi has looked for opportunities to go above and beyond the classwork in an effort to improve her skills,” Weich said. “She is a hard worker and is dedicated to being prepared for the future of media.

“Lindenwood encourages students to get several internships to gain experience and to prove they can do the work,” said Weich. “Her internship at CNN proves that students who put forth the effort can find great opportunities.”

Lindenwood provides students with a true converged newsroom experience, said Weich. Not only does it offer experiences like the Super Semester, where students gain valuable experience shooting and editing video and producing a news program, it offers students the opportunity to work for KCLC radio station, the Legacy student magazine and the Lindenlink student website.

One dream realized, Virtanen said she doesn’t want to keep her accomplishment to herself. The senior is eager to bring back to St. Charles the inspiration and insight she found in London, sharing the things she’s learned with her fellow students.

Virtanen said she can’t believe how fast her time at Lindenwood has flown by.

“I’ve learned so much in school, and now is the time for me to bring it all together to finish my degree,” Virtanen said. “It’s been a wonderful experience. I wouldn’t change a thing.”