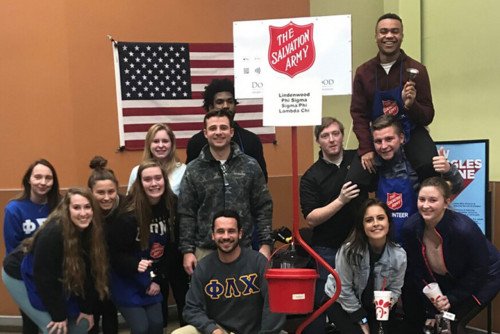 Teams of bell ringers took turns ringing the bell from Dec. 2 to 6 at the Salvation Army kettle at the Schnucks grocery story in the University Commons, located across First Capitol Drive from the university’s St. Charles campus. The event was expanded from two days in 2018 to five this year.

Seventeen teams participated. The following are the top teams in various categories:

Staff groups from the Department of Enrollment Management and Student Engagement raised $635.49, collectively. At an event on campus after the challenge concluded, Lindenwood University President John R. Porter recognized the teams.

“The Bell Ring Challenge gives the Lindenwood University students and employees an opportunity to raise money for an amazing organization that helps more than 23 million Americans annually,” Williamson said. “In addition, it strengthens our community relations with Pepsi and the Salvation Army.”