December 3, 2010
Mix together a struggling theater company, a tired and tattered production of “A Christmas Carol,” a really bad actor and a visiting inspector from the National Endowment for the Arts, and you get “Inspecting Carol,” an off-the-wall holiday farce. Everything that could possibly go wrong does as a fictitious theater company struggles to mount their annual production of the holiday classic. 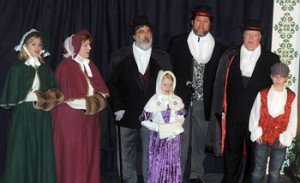 Because nothing’s funnier than good actors playing the gamut of theatrical personalities as chaos reigns, the Brass Rail Players at Lindenwood will present this zany holiday treat for eight performances, Dec. 2-5 and Dec. 9-12, at Lindenwood University’s Belleville Auditorium, the Premier Center for the Arts, 2600 W. Main St., Belleville, Ill.

Show times are 7:30 p.m. for Thursday through Saturday, and at 2 p.m. on Sunday. As an added bonus, holiday carolers and entertainment will be featured at each performance. Local church, school and community groups will perform Christmas music in the lobby from the time the box office opens (one hour prior to show time) until 15 minutes prior to curtain, and again at intermission. The Brass Rail Players’ cabaret roadshow group, Off Track, will present a musical, audience participation pre-show that will begin 15 minutes before each performance.

“Inspecting Carol,” was written by Daniel J. Sullivan and first produced by the Seattle Repertory Company in 1991, where he was artistic director.

The production is directed by Maryann Totsch Hopwood, with assistant director Robert S. Hopwood. Tickets are $15, or $12 for senior citizens, students, military and group rates. The box office opens an hour before the curtain, or you can reserve tickets by calling (618)767-6016 or e-mailing tickets@brassrailplayers.org. Tickets also can be purchased at the Oregon Trail Roasting Company, 201 W. Main St., in downtown Belleville during business hours.

If you’re looking to escape the holiday hustle-and-bustle or want to see something different this Christmas season, join us for “Inspecting Carol.”