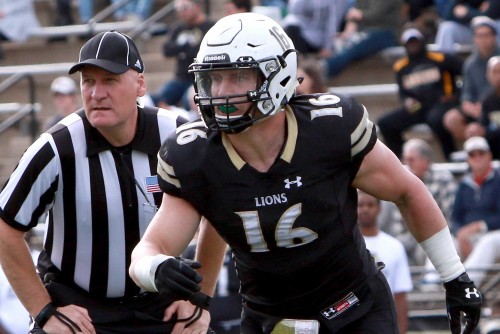 Former Lindenwood football player Connor Harris announced this evening that he has signed a free agent contract with the New York Jets. In the fall, he will look to become the fourth Lion to appear in a NFL contest, joining DeDe Dorsey, Brian Schaefering, and Pierre Desir.

Harris was the 2016 winner of the Cliff Harris Award, which is given to the National Defensive Player of the Year at the NCAA Division II, NAIA Division III, and NAIA levels. He was also a first-team all-MIAA and All-American selection. During this past season, Harris recorded 138 tackles, 8.5 tackles for loss, one sack, two interceptions, and one forced fumble.

In his career, Harris was a four-time all-MIAA selection, including the 2015 Conference Defensive Player of the Year, and a three-time All-American. He is the NCAA All-Division record holder for career tackles with 633 stops. He averaged over 13 tackles a game in his career, and had 38 double-figure tackle games. In his career, Harris also had 34.0 tackles for loss, 8.5 sacks, six interceptions, 14 pass breakups, three forced fumbles, and five fumble recoveries.

Harris was also a versatile player at Lindenwood. As a wildcat quarterback, he rushed for seven touchdowns and averaged 6.6 yards per carry. He was also a key special teams contributors, including averaging 37.3 yards per punt and making 12-of-12 PATs that he attempted in his career.

Since concluding his college career, Harris has showcased his talents at the Reese's Senior Bowl and the NFL Combine. He recorded six tackles at the Senior Bowl. Among his combine results was finishing fifth out of the linebackers in the 60-yard shuttle with an 11.84 time. He was also in the top-15 in the 40-yard dash, vertical jump, three-cone drill, and 20-yard shuttle.

Harris is originally from Lee's Summit, Mo., and was the 2011 Missouri 6A Defensive Player of the Year for Blue Springs South High School. Harris, a five-time MIAA Academic Honor Roll award winner, graduated from Lindenwood in the winter with a criminal justice degree.