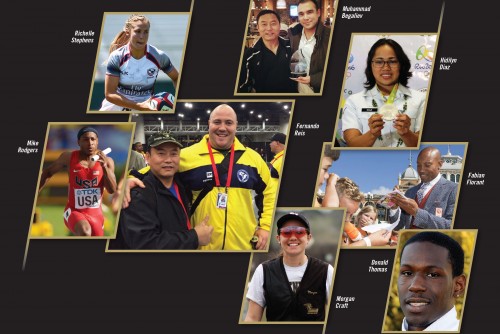 Eight athletes with connections to Lindenwood made the institution proud by qualifying to compete in the Olympics held in August in Rio de Janeiro, Brazil.

Morgan Craft (’15) finished fifth in women’s skeet shooting, narrowly losing out in a shoot-off for a chance to compete for the bronze medal. She finished two spots behind her idol and Team USA teammate, Kimberly Rhode, who medaled in her sixth consecutive Olympic Games.

Craft reflected on her Lindenwood days following the games, telling ESPN Radio that she fondly remembers her time at the university where she honed her skills and contributed to 13 consecutive shooting national championships.

“Lindenwood was the only school I applied to,” Craft told host and alum Randy Karraker (’84) “I came for a visit and fell in love with the campus.”

Weightlifter Hidilyn Diaz was going to move to Lindenwood in August to begin classes. But her plans were put on hold when won a silver medal for her native Phillipines. Diaz, who will enroll in the spring, became a national hero by winning her country’s first medal in 20 years.

Donald Thomas (’06) made his third Olympics appearance. Representing the Bahamas in the high jump, he tied for seventh with a leap of 2.29m. He finished 21st at the 2008 Olympics and 27th at the 2012 Summer Games.

Triple jumper Fabian Florant competed for Lindenwood from 2002-04 and was a four-time All-American and two-time national champion. Representing the Netherlands, he finished 22nd.

Reis finished 12th in the 2012 London Olympics. At Lindenwood, he was the 2010 and 2011 national collegiate champion.

Richelle Stephens, 20, qualified for the Olympics as the youngest member of the Team USA’s women’s rugby squad which finished fifth.

Muhammad Begaliev, a sophomore in 2015-16, qualified to represent Uzbekistan in the 85kg men’s weightlifting division but announced just prior to the start of the Olympics that he was unable to compete because of a knee injury.

The 2016 games mark the third straight Summer Olympics in which Lindenwood has had an athlete or former athlete compete. Three qualified for the 2008 Olympics and five in 2012.

Sprinter Mike Rodgers was a part of the men’s 4X100 team. The American relay racers were serious contenders for the gold medal and after a strong showing in their heat race they crossed the finish line third in the finals. A short time later, it was announced that team USA was disqualified for an improper handoff of the baton. Team USA protested the ruling but the appeal was denied.