Digging up the Past - Archaeology Students Search for Historic Church Site 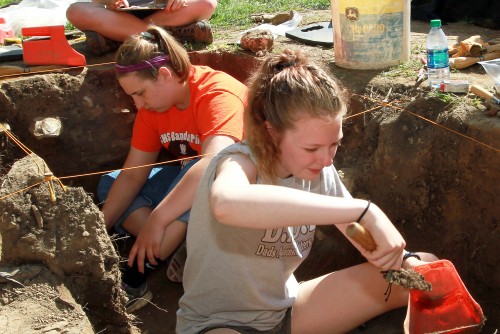 The group set up a primary site at 401 S. Main St., based on some past excavation Dasovich had done in the area and on some stories he had heard about the location of the church. In digs such as this, archaeologists set up boxes a meter square and dig down within their boundaries, painstakingly removing dirt a layer at a time to avoid damaging any artifacts.

The students did not find evidence the church had been there, but they did uncover 10,000 early 19th century artifacts: knife blades, carved bone handles, and fragments of bottle glass and ceramics.

They also found human remains—a burial dating back to 1800. Weber, an anthropology major with an emphasis in archaeology, initially uncovered the body. In accordance with Missouri law, they first contacted the St. Louis County medical examiner, who confirmed it was not a crime scene, after which they were free to proceed examining the skeleton.

“They were excited and a little horrified,” Dasovich said. “They felt they had a lot of extra pressure to not mess anything up.”

From the skeleton, they were able to tell several things about him: he was 5 feet, 5 inches tall and was in his late teens when he died, though there was no indication of a cause of death. The wear in his teeth indicated he smoked a clay pipe, probably for a few years, Dasovich said.

Though the shroud he had been buried in was long gone, the brass stick pins that held it together were still there in a line. It is from these and some buttons that Dasovich was able to determine the era in which he had lived. He had been buried in a coffin, though it was mostly gone, too.

The grave was on the border of the former site of the first city cemetery, which was in that location from 1790 to 1828.

“When they moved the cemetery, they didn’t move the graves—just the markers,” Dasovich said. “We detected the edge of another gravesite as well during the excavation.”

When they were done, the group re-buried the body, and Dasovich said there is talk of putting a marker there. Even if the original marker had not been moved, it would most likely not have lasted. Only the wealthy could afford stone markers, and most were made of wood, often with no names on them, Dasovich said.

“I think it would be great if they put a marker there,” Dasovich said.

Field schools like Lindenwood’s are critical for students who want to go into archaeology, as students learn excavation techniques, how to work with field notes and forms, how to deal with artifacts in the ground, and how to work with a team.

As for the church, Dasovich said one problem is that the street was much narrower in those days, and if the church was up next to it, the site could be underneath the current street and sidewalk.

“That’s often how it is in an urban environment,” Dasovich said. “I might go back someday and talk to the city about it.”