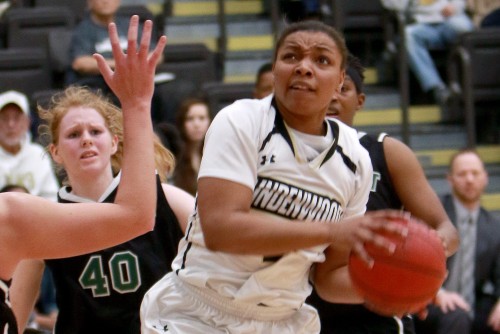 Lindenwood University student-athletes brought their passion to play sports and their academic pursuits together, recently completing a season-long project with the Human Performance Department of the School of Health Sciences to closely examine how their bodies work.

During the recently-completed 2016-17 women’s basketball season, players alternately wore monitors under their clothes to measure their heart rates for four days at a time, according to Assistant Professor of Exercise Sciences Chad Kerksick. The monitors measured the athletes’ estimated calorie burn during days in which they had games, practiced, and rested.

“The idea was to closely monitor the players’ metabolism rate so we could manage their diet to try to get them in optimum condition to play,” Kerksick said. “We knew that their calorie burn probably varied greatly from game days to practice days to rest days. We wanted to know how much.”

Exercise science major Bre Zanders, a senior forward, managed the research project. She found that players often burned 1,200 more calories on days when they practiced than they did when they rested. One player burned 3,290 calories on a day when she practiced and 2,067 on a day off.

The women’s basketball team completed the season 14-16, finishing strong with two wins in the Mid-America Intercollegiate Athletics Association tournament. The Lions defeated the University of Nebraska–Kearney 85-68 in the first round before edging Pittsburgh State University 64-63. Their season ended in a heartbreaking loss to the University of Central Oklahoma, 84-82.

Zanders said, for the most part, the players weren’t effected by the monitors, which were glued to their chests 24 hours a day over the four–day test period.

“You didn’t know it was there after a while when you got used to it,” Zanders said. “Sometimes in a game, they’d come loose and the player would reach under her uniform, pull it out and toss it to someone on the sideline.”

Those instances were rare, fortunately, because Kerksick said the idea of one of the $1,400 monitors being lost or damaged made him nervous. It is likely the metabolism testing will continue in the fall with another team. But it hasn’t been decided which one yet.

Football would be an interesting choice, according to Kerksick, but he said he’s concerned about exposing the monitors to the pounding players take on the gridiron.