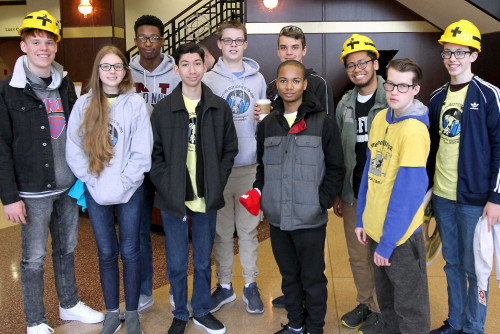 For the third year in a row, Lindenwood University is serving as a sponsor of FIRST Robotics and hosted a regional event to kick off the 2020 season Saturday, Jan. 4, 2020.

Approximately 800 high school students, mentors, and parents representing 42 teams from central and eastern Missouri and southern Illinois gathered at the university’s J. Scheidegger Center for the Arts on the St. Charles campus to view a live feed announcing the challenge for the 2020 FIRST Robotics competition, scheduled for this spring in St. Louis. For the competition, student teams must compete against one another in a specific set of challenges with a robot they designed and built.

At the event the teams each received a kit of parts with which they will begin designing and building industrial-grade robots to play the game described in the kick-off. In the competition, the teams will compete with and against others from the region and will have the opportunity to move on to the national and international levels.

The event included presentations by T.J. Rains, Lindenwood’s vice president for information technology, and Dr. Ricardo Delgado, dean of sciences, as well as an appearance by Louie, the Lindenwood mascot. Rains and Delgado said the university’s involvement with the event is a part of its commitment to STEM (science, technology, engineering, and math) education at all grade levels.