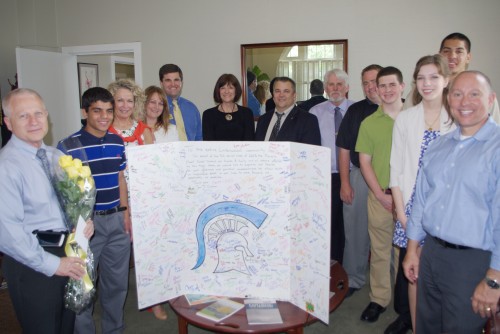 On Wednesday, June 5, Dr. James D. Evans, PhD, received a contingent from the Francis Howell School District, which came to his office to thank the university for hosting commencement ceremonies the prior Sunday. The ceremonies for all three Francis Howell High Schools had been scheduled for Saturday, June 1, at the St. Charles County Family Arena but were cancelled less than 24 hours before when the arena was damaged by severe weather on Friday, May 31.

During the presentation Wednesday, Dr. Pam Sloan, superintendent of the Francis Howell School District, recounted the story, which included a flurry of phone calls and, ultimately, the ceremonies being held outdoors at Lindenwood’s Harlen C. Hunter Stadium throughout the day on Sunday, June 2. Because of the ample seating available at the stadium, students were not required to restrict the number of guests at their ceremonies.

Recent graduates Adam Brooks, Derek Puni, Jeremy Karp, and Amanda Pelletier spoke briefly at the presentation, expressing how much it meant to them, not only to have the ceremonies in the first place, but to have them in front of all their families and friends.