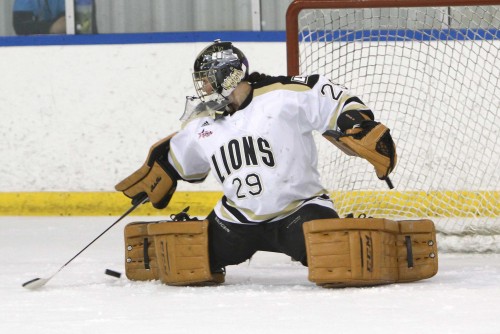 Former Lindenwood women's hockey goaltender Nicole Hensley was chosen as one of the 10 recipients for the prestigious NCAA Top 10 award. Hensley becomes the first player from the College Hockey America Conference to win the award, and the fifth recipient all-time from the sport of women's hockey.

The award recognizes former student-athletes for their successes on the field, in the classroom, and in the community. Recipients completed their athletics eligibility during the 2015-16 academic year and will be recognized at the Honors Celebration during the NCAA Convention in Nashville.

Hensley, now an assistant coach for the Lindenwood women's hockey team, concluded her four-year Lindenwood career as one of the most decorated and successful student-athletes in school history. Hensley was a two-time member of the all-CHA first-team. The goalie had a school-record 2.52 GAA, and she had a .922 save percentage during her senior season. Hensley compiled 947 saves as a senior, becoming the NCAA all-time saves leader on Jan. 29 at Robert Morris, eclipsing the previous mark of 3,809. Hensley ended her career with 4,094 career saves. Hensley was honored as the CHA goalie of the week 10 times, and goalie of the month once during her illustrious career.

Hensley won four consecutive CHA Student-Athlete of the Year awards, and landed on the CHA all-Academic team each year.

Hensley has recorded shutouts for the U.S. Women's National Team at both the 2016 IIHF Women's World Championships in Kamloops, British Columbia and the 2016 Four Nations Cup in Finland.