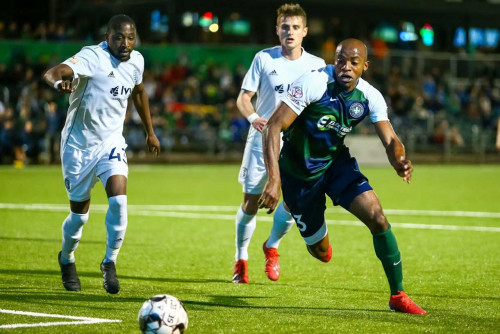 Tickets for all seats are now on sale for $19 ($15 for season ticket holders) at (636) 680-0997 or tickets@saintlouisfc.com. Saint Louis FC competes in the United Soccer League (USL); the U.S. Open is open to teams at all levels of professional soccer.

“Lindenwood has always had a great relationship with Saint Louis FC over the years, and we are excited to help them by hosting this game at Hunter Stadium,” said Brad Wachler, Lindenwood’s vice president for intercollegiate athletics. “Our ability to host this event allows us to help a great community partner in need but also allows us to showcase our beautiful campus and facilities to more people from across the Midwest.”

Daniel Sweeney, an associate professor of sport management at Lindenwood, has worked with the team since 2014 putting together the game day scripts and as its venue announcer, both of which he has done for a number of other soccer teams and events, including the FIFA Women’s World Cup and DC United of Major League Soccer.

According to the Saint Louis FC, the U.S. Open Cup is the oldest national soccer competition in the country with a history of St. Louis champions dating back to 1920. Since the tournament started in 1913, 11 champions have come from St. Louis with the most recent being the St. Louis Busch Seniors, who won in 1988. Lindenwood University will be the fifth venue in the metro area to host a U.S. Open Cup contest, the others being Hadlan’s Park, High School Field, Sportsman’s Park, and Soccer Park.

“We are excited to bring Saint Louis FC and our Major League Soccer opponent to St. Charles County,” said Patrick Barry, STLFC president. “This change in location represents an opportunity to bring professional soccer to another area of St. Louis. The silver lining with our minor flooding situation is being able to add another community field to the long list of locations that have hosted a U.S. Open Cup match in this historic city.”