In its first year in the American Midwest Conference, the Lindenwood Belleville softball team has captured the regular season championship, earning an automatic bid to the NAIA National Championship opening round. With a Park University loss on April 24, the Lady Lynx also clinched the top seed in the conference tournament next week. The Lady Lynx are the first female team in school history to win a conference championship. 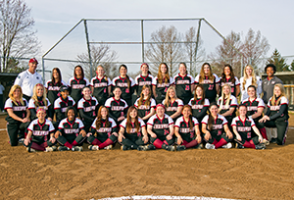 To finish out conference play, the Lady Lynx won 11 of their final 12 games. This included doubleheader sweeps over Williams Woods, Freed-Hardeman, St. Louis College of Pharmacy, Stephens, and Missouri Baptist. After starting the season with a 3-7 record, falling to all ranked teams, the Lady Lynx finished the rest of the season with a 28-14 record.

Taylor Winn leads the Lady Lynx in hitting with a .370 average. She has 47 hits, including eight doubles and two home runs. Winn ranks second on the team in RBIs with 26. Winn holds an 11-9 record in 121.1 innings pitched. Winn has collected 106 strikeouts, including a season-high nine strikeouts against Taylor University on March 7. Jamie Navarro ranks second on the team in hitting with a .369 average. In 49 games, she has collected a team high of 30 RBIs to go along with 45 hits. Navarro has nine doubles, one triple, and four home runs.

As a pitcher, Michele Pilster ranks first in wins (13), earn run average (1.97), and saves (3). In 135.1 innings pitched, Pilster has accumulated 97 strikeouts, including a season-high nine strikeouts against William Carey on February 28.

In the final weekend of the season, the Lady Lynx split with Judson University on April 24, before sweeping a doubleheader from Robert Morris–Chicago on April 26. In a 2-0 loss to Judson, Pilster suffered the loss after going 3.2 innings, allowing just one earned run while striking out four. In game two, Kaylin Stewart collected two hits, including a solo home run, to lead the Lady Lynx to a 4-2 victory. Amanda Ahlert earned the win as pitcher after going 5.2 innings, allowing just six hits and two earned runs.

The Lady Lynx will take on the no.-eight seed, Williams Baptist, in the opening round of the AMC Tournament. First pitch is schedule for 9 a.m. Wed., April 29, in Columbia, Mo. The Lady Lynx will try to make history once again this week as they look for their first conference tournament championship.

With an automatic bid to the NAIA National Championship opening round, the Lady Lynx will travel to one of 10 host sites. The format is 10 four-team double elimination tournaments, with the winner of each site heading to the NAIA Softball World Series in Sioux City, Iowa, May 22-28. The Lady Lynx will find out where they will be travelling on May 7, and the opening round will take place on May 11-13.