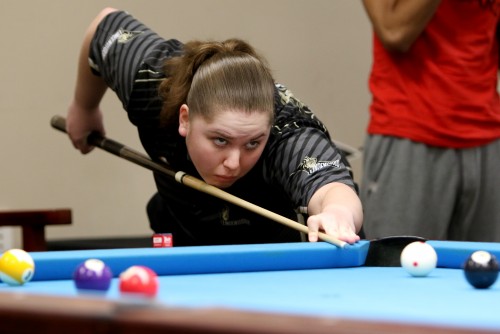 Miller became the first player ever to claim a fourth straight ACUI billiards national title by defeating Heather Platter of the University of Maryland to earn the 2017 women’s division championship. It was an all-Lions final in the men's division with Robinson beating teammate and 2014 and 2015 national champion Landon Shuffett, earning the tournament Sportsmanship Award in the process.

"It's been very satisfying to see how the performance and behavior of our team has raised the standard of competition overall, and to have one of our players voted for the Sportsmanship Award by his peers is even more rewarding, because that's how we define winning,” said Lindenwood Billiards Coach Mark Wilson. "It's more than just the final score. It's also setting a good example while changing the image and direction of our sport in a positive way."

Wilson said Lindenwood’s reputation as the pre-eminent college billiards team in the nation has attracted the top young talent in the world to the school’s St. Charles campus, allowing the university to sustain its dominance in the sport.

“We’re very fortunate to have the top players want to play here,” Wilson said. “They see we take billiards seriously at Lindenwood University and that we’re well-supported, so it’s a very attractive program to people who want to compete at the highest level.”

Miller will graduate in December but has two years of eligibility remaining, so it’s possible she could add to her record of four collegiate titles. She also won seven-consecutive junior national championships beginning at age 11. The victories by Miller and Robinson extended to four years a streak of Lindenwood players winning both the men's and women's individual championships. Lindenwood’s Sharik Sayed, who was unable to participate in the championship tournament this year because of injuries suffered in a car accident, won the 2016 ACUI 9-ball national title.

The ACUI 9-Ball Championships were held June 16-18 at the Billiards and Game Room on the University of Michigan campus in Ann Arbor, Mich.