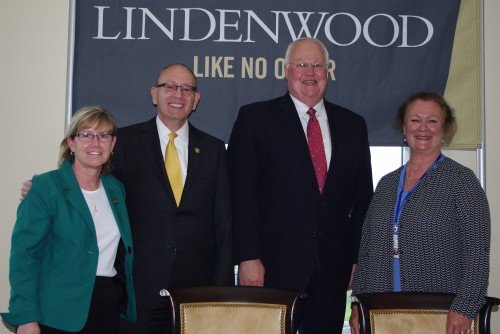 The Historic Daniel Boone Home and surrounding property in Defiance is on the verge of becoming a St. Charles County park with a donation from Lindenwood University. Lindenwood, which has owned the home and property since 1998, is gifting nearly 300 acres to the people of St. Charles County. An agreement was approved by the County Council on April 25, and the transaction is expected to be complete by mid-May.

Shonrock and County Executive Steve Ehlmann participated in a formal signing of the donation on Lindenwood’s St. Charles campus today, where it was announced the property will be named Lindenwood Park.

Ehlmann said the county already is assessing opportunities for expanding current programming on the property, which currently includes tours, events and educational programs.

“My enthusiasm for this donation is two-fold,” Ehlmann said. “First, it enables us to expand our county park system to provide more green space for outdoor activities, and second, I am thrilled that we will be part of sharing this rich history of our region with others.”

The nearly 300-acre site includes the Historic Daniel Boone Home, adjoining 66-acre Boonesfield Village historic site, and more than 200 acres of surrounding property. The county will continue to operate the Village complex, including the Boone home, as a tourist site.

The university holds a variety of academic activities at the site, including field biology, archaeology, history, and recreation leadership classes and activities, and will continue to do so under the agreement.

Lindenwood acquired the Boone home in 1998 from a private owner and purchased the additional property over the next several years. The home itself, a four-story Georgian-style structure, was built by Boone’s son Nathan with Boone’s help. Boone spent his final years in the home and died there in 1820. Boonesfield Village consists of more than 20 additional historic structures, all of which were relocated to the property over the course of several years.

Lindenwood University, founded in 1827, is an independent liberal arts university offering more than 200 undergraduate and graduate degree programs in diverse areas of study and traditional and accelerated formats, including online. Lindenwood operates residential campuses in St. Charles, Mo., and Belleville, Ill., as well as numerous regional centers and extension sites throughout Missouri.

The St. Charles County Parks and Recreation Department was created in 1997, and today has 3,174 acres of parkland, including 542 acres of undeveloped land in reserve in the St. Paul area, New Melle and St. Charles. For more information, visit sccmo.org.