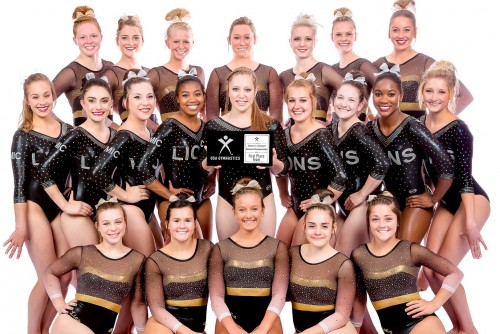 Lindenwood's record-breaking score was a 195.875, besting the old record of 195.800. The team needed every bit of the new record, as it just edged out Bridgeport’s score of 195.800. Seattle Pacific was third with 194.875, and Brown was fourth with 194.500. The Lady Lions score was the second highest in the history of the USA Gymnastics Women's Collegiate National Championship.

"The championship capped off an incredible end to the season," said Head Coach Jen Kesler. "We had to fight through adversity all year, but everyone came together tonight and it was a total team effort to win the title."

The national championship event was tight throughout, as all four teams were within 0.325 of each other halfway through the competition. Lindenwood moved into first place on the third rotation but led Bridgeport by just 0.05, and the Purple Knights were going into their strongest rotation, the floor, in the final set.

Lindenwood put the pressure on Bridgeport, though, by scoring 49.175 on the vault, its second-best score in program history. After a solid start by Trystien Charles and Samantha Borges, Aubree Horn went third and scored 9.850. Kayla McMullan followed with a score of 9.875, and Valeri Ingui set the second-best mark in program history with a 9.900. Rachel Zabawa closed out the rotation, scoring 9.775, improving the team's score by 0.200, which ended up being crucial.

While the Lady Lions watched, Bridgeport, was putting up big numbers on the floor, including three scores of 9.900 or higher. The Purple Knights’ other marks were 9.750 or lower, and Lindenwood clinched the title with two gymnasts remaining.

The Lady Lions then cracked the 49 mark on the floor with a score of 49.150. The final three gymnasts led that charge, as McMullan had a 9.900, Andaevea Alexander had a 9.875, and Zabawa scored 9.850. Those marks helped Lindenwood go ahead for good.

This was the final team meet for eight members of the inaugural 2013 Lindenwood team. That class, which includes Lauren Cartmell, Charles, Floyd, Daniela Fumagalli, Courtney Heise, Katie Kuehl, Ingui, and Zabawa, leaves one of the top legacies in Lindenwood athletics. Since 2013, it has won two straight conference and USA Gymnastics Women's Collegiate National championships.

"The senior class is an incredible group of women," said Kesler. "They have perserved and paved the way for the Lindenwood gymnastics program. Four years ago, they took a chance on Lindenwood, and tonight was the perfect way for them to go out."

The gymnastics team will end the season Sunday afternoon at 1 p.m. at the USA Gymnastics Women's Collegiate Individual Finals. Ingui, Horn, and Zabawa will compete in the vault; Zabawa and Cartmell will be in action in the beam; and Alexander, McMullan, and Zabawa on the floor.