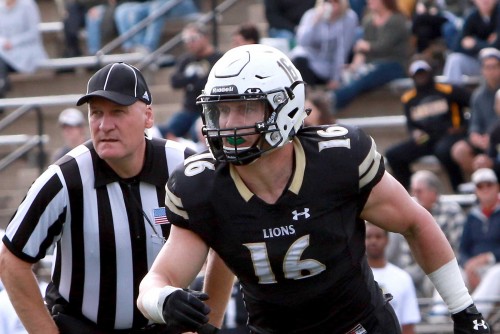 This is the fourth year that the Cliff Harris Award has been given out, and the second time that a Lion has been named the Small College National Defensive Player of the Year. In the inaugural year of the Cliff Harris Award, former Lion Pierre Desir received the honor. Other winners include Darius Allen (Colorado State University-Pueblo) and Marqui Christian (Midwestern State University). The award is named after former Dallas Cowboys legend Cliff Harris, who started his career at Ouachita Baptist University.

Connor Harris, a senior linebacker, was chosen out of 141 players who were nominated for the award, including 52 NCAA Division II defensive players and four other MIAA student-athletes.

In his first year at Lindenwood, Harris moved to a new position but still started every game as a true freshman. He led the MIAA with 126 total tackles, and his 10.5 tackles per game was second in the MIAA and 19th in the nation. Harris was named an honorable mention all-MIAA pick, and he led the Lions to a postseason appearance in the Mineral Water Bowl.

In 2013, Harris got the year off to a great start with 26 tackles in the Lions first two victories of the season. However, in the third game of the year, he suffered a season-ending injury and received a medical redshirt for the season.

After battling back from the injury, Harris returned better than ever in 2014. He recorded 152 tackles, and his 13.8 tackles a game ranked fourth in the country. Harris was a first-team all-MIAA and second-team All-American at the conclusion of the season.

In 2015, Harris had one of the best defensive seasons in NCAA history. He set a NCAA Division II single-season record by recording 16.7 tackles a game. Harris recorded double-figure tackles in every game and finished the year with 184 tackles. He was the MIAA Co-Defensive Player of the Year and was a first-team All-American.

This past season, Harris went on a record-breaking tour through the MIAA. He already owned the conference career tackle record before the season started. He then broke the NCAA Division II career tackle record against Northeastern State, the NCAA All-Division career tackle record at Fort Hays State, and became the first player in college history to surpass 600 career tackles against Nebraska-Kearney. Despite teams avoiding the middle of the field more often than previous seasons, Harris still finished third nationally with 12.5 tackles a game, and had 138 total tackles. He was once again a first-team all-MIAA and first-team All-American selection.

Harris finished his career with 633 total tackles, including 323 solo stops. He had 34.0 tackles for loss and 8.5 sacks. Harris intercepted six passes during his career, had 14 pass breakups, forced three fumbles, and had five fumble recoveries. Some of his turnovers were game changers, including two interceptions in a season-opening win over Washburn in 2014, and an interception return touchdown in the win this year against Nebraska-Kearney. Harris played in 48 games during his career, and started every one of those contests.

Harris was much more than a defensive star for Lindenwood. Throughout his career, he was a key contributor on both special teams and offense. He punted 35 times in his career for a 37.3 average, and had seven inside the 20-yard line. This past season, Harris was also a placekicker at the end of the season, making all 12 PATs he attempted. On offense, Harris rushed 50 times for 328 yards and seven touchdowns, and he averaged 6.8 yards per carry.

Despite his unbelievable numbers, Harris greatest accomplishment was as a leader and an example for his teammates both on and off the field. He was a team captain for Lindenwood every season since 2013. Harris also earned five MIAA Academic Honor Roll honors, and graduated Lindenwood this month with a degree in criminal justice.

After following his former teammate, Desir, as a winner of the Cliff Harris Award, Harris will now look to follow Desir in getting a shot in the NFL. Harris begins that pursuit when he competes in the NFLPA Collegiate Bowl on Jan. 21 in Carson, Calif.