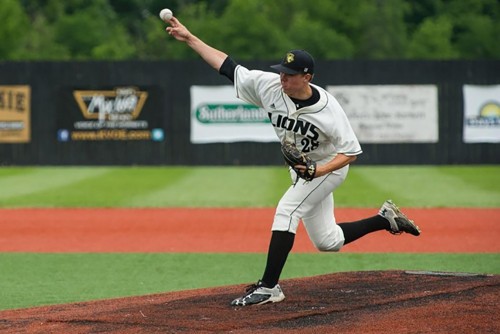 The Lindenwood baseball team won the 2017 NCAA Division II Central Regional Championship on Monday afternoon in Emporia, Kan., with an 8-4 victory over Central Oklahoma. With the win, Lindenwood advances to the eight-team NCAA Division II National Championships, which will take place on May 27-June 3 at The Ballpark in Grand Prairie in Grand Prairie, Texas. The Lions will open up play in that tournament at 7 p.m. Saturday against the South Region champion, Delta State.

The Lions won the Central Regional Tournament by going undefeated in their first appearance in the NCAA postseason event. The regional championship is the second for Lindenwood athletics since joining the NCAA, the first belonging to men's soccer in 2013.

In the regional championship game, the Lions turned to true freshman Blake Beckmann on the mound, and the righty responded with the best game of his season. He was dominant early in the game, retiring the minimum through the first five innings. Beckmann struck out eight batters in that span and allowed just one hit, which was quickly taken care of by a double play.

While Beckmann was shutting down the Bronchos in the early innings, his offense gave him an early lead with a four-run first inning. A pair of errors helped Wes Degener and Tyler Muehling score, and Conor Behrens capped the inning with a two-run homer. The offense added two more runs in the third, with the big hit being an RBI triple by Drew Quinones, who later scored.

Beckmann continued cruising in the middle innings, allowing just one hit in the sixth and seventh innings. Lindenwood scored its final two runs in the bottom of the sixth. An extra base hit was key again as Sam Baxter had an RBI double and then scored on an RBI single by Paul Sherwood.

In the eighth, Central Oklahoma finally broke through on Beckmann with a one-out RBI double. Beckmann limited the damage by retiring the next two batters.

In the ninth, Beckmann hit the 100-pitch mark for the first time since mid-March, and the Bronchos opened the inning with a double and walk. After Beckmann was pulled, Central Oklahoma sneaked a home run over the left-field fence to narrow Lindenwood's lead to 8-4. With one out in the inning, the Lions brought in ace Brendan Feldmann. He struck out the first batter he faced and then got a routine fly ball to right field to start Lindenwood's second celebration in a week following its MIAA conference championship eight days earlier.

Beckmann finished the contest with a season-high nine strikeouts, and he allowed just five hits and one walk. Offensively, Quinones led the way with two hits, two runs, and two RBI. Muehling also scored twice and had two hits, and Behrens had two RBI.

Quinones, a designated hitter, was named MVP of the Central Regional Tournament. He was 9-for-18 with eight runs and seven RBI in four games. First baseman Behrens, shortstop Paul Sherwood, outfielder Rayce Singbush, and pitcher Connor Law were all named to the all-tournament team.

Lindenwood improved to 39-18 on the season, and it is 23-4 since the start of April. Prior to moving to the NCAA, Lindenwood made it to the NAIA World Series during the 2007 season.