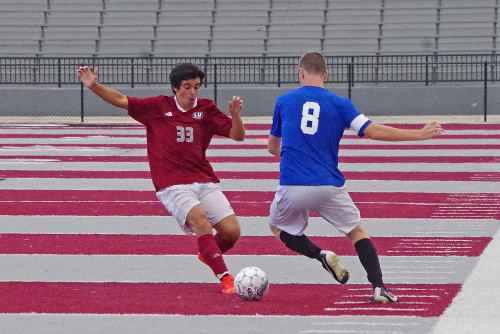 Lindenwood University–Belleville Men’s Soccer is set to host Southwestern Illinois College in the annual Mayor’s Cup to kick off the 2016 home season. The game will take place Tuesday, Aug. 16, at 6 p.m. on Lindenwood Belleville’s home field. This will mark the seventh consecutive year the two teams face off in the Mayor’s Cup.

“It is a game that my players really look forward to,” said Lindenwood Belleville Head Coach Dan Hogan. “It’s a great competition and a motivational tool for the pre-season.”

Belleville Mayor Mark Eckert will attend, leading the pre-game ceremonies and doing the coin toss. The winning team receives a trophy, which is also displayed in the mayor’s office.

“The Mayor’s Cup is a great game for the local soccer community, as both teams boast players from the surrounding area,” said Hogan.

Admission to this event is free and concessions will be available onsite. For more information, contact Hogan at (618) 671-6044 or DHogan@lindenwood.edu.