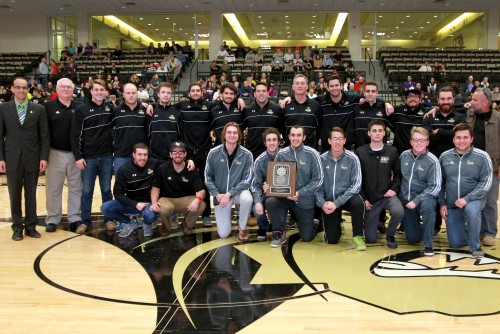 Both teams played outstanding defense in the opening quarter, with no goals scored on either side until Javier Platero finally broke the shutout with 41 second left to give Lindenwood a 1-0 lead.  That advantage was padded with a shot from Marc Tahull that found the back of the cage early in the second, but the 49'ers answered midway through the quarter with a pair of markers within one minute of play to tie the game at two.  Long Beach State took the lead just 30 seconds later on a penalty shot before Toni Storic tied the contest at three with 56 seconds remaining, but the Lions suffered a key loss when Weston White was whistled for a misconduct call just 13 seconds before the break.

Despite the setback, Lindenwood ultimately gained momentum in the third quarter.  The Lions took back the lead on a Tony Storic man-advantage goal 90 seconds into the frame, but Long Beach State countered moments later to tie the score at four.  From there, Lindenwood broke the game open with four unanswered goals from the arms of Diego Aldea and Platero.  Aldea netted his two shots at even strength while Platero buried two penalty shots for the Lions.  Lindenwood carried an 8-4 lead into the final quarter and Tahull expanded the advantage to five with his second score of the contest at the 77 second mark.  The 49'ers managed a single tally with 1:32 remaining, but that was as close as they would get before the clock ran out, sending the Lions into celebration.

Platero led Lindenwood with a hat trick of goals while Tahull, Aldea, and Storic each scored twice to pace the offense.  Special teams were a major factor as the Lions converted 3-6 advantage opportunities while holding Long Beach State to two goals in seven chances.  Mario Caballero was rock solid between the pipes with 10 saves on the day and earned co-Player-of-the-Game honors with Platero for the effort.  Caballero was also named a First Team member of the All-Tournament Team and was joined by Storic and Aldea with the honor.

The Lions have been on a great run at the CWPA Men's Division I Championship.  They advanced to the title game for the fourth straight year, having lost to UCLA in 2013, then following it with three straight wins against San Diego State in 2014 and 2015, and the 49'ers this year.  Lindenwood finished the season with an overall record of 19-1 with the only blemish coming early in September in a 16-15 loss to Gannon University.  The Lions also captured their fifth straight Missouri Valley Division title with a 22-4 victory over McKendree in mid-October.