National Championships Pile Up in April 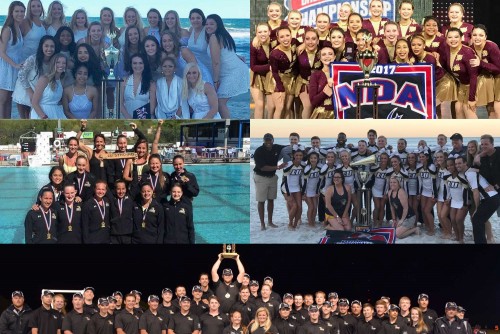 It’s been an eventful April for Lindenwood University Athletics, with five team national championships recorded since the beginning of the month, including shotgun sports, competitive cheerleading, the Lionettes dance team, synchronized swimming, and D3 roller hockey. Another, for Olympic weightlifting, was still awaiting verification as of Tuesday afternoon, April 11.

The shotgun sports team extended its record-setting run of national titles with its 14th straight win at the ACUI Collegiate Clay Target National Championships March 28 to April 2 in San Antonio, Texas. The Lions swept the team events: five stand, sporting clays, international skeet, international trap, American Trap, and American skeet, in which the team broke a record with a score of 497 out of 500. The competition included 800 athletes from 85 schools. The Lindenwood team consisted of 45 elite shooters.

The Lionettes dance team won its first national championship in program history in Jazz Division II at the NCA/NDA Collegiate Cheer and Dance Championships, April 5-9 in Daytona, Fla. The team scored 9.654 and was one of seven to advance to the finals, where it recorded a score of 9.739 to beat second place Grand Valley State. The team earned top marks in six of seven categories, including 9.9 in performance impression, 9.6 in uniformity, 9.75 in quality of movement, 9.78 in choreography, and 9.68 in staging. They also came in third place in the hip hop division.

Also at the NCA/NDA Collegiate Cheer and Dance Competition in Daytona, the Lindenwood competitive cheerleading team won its fourth national championship in Large Coed Division II. The team was one of four to advance out of the preliminary round, which it did with the highest score, and then finished first in the finals with a score of 95.8, the highest ever for the squad. The title was the squad’s third in as many years; its first national championship was in 2011. The team also competed in All-Girl Cheer Division II, coming in fourth in the finals, and Intermediate Small Coed II, finishing fifth in the finals.

Synchronized swimming won its third consecutive national title in dominating fashion at the U.S. National Championships April 4-7 in Oro Valley, Ariz. The Lions won all six events, including team tech and team final, all three top spots in duet tech and duet final, and the top two scores in solo tech and solo final. The overall national title is determined by the combined scores from all events.