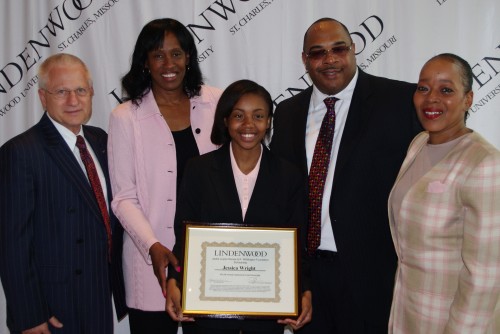 Applications were distributed to all high schools in the Greater St. Louis Metropolitan Area. The opportunity was open to all incoming first-year students who met Lindenwood admission requirements and demonstrated academic success, leadership, and financial need. Each applicant also submitted an essay describing his or her personal goals and aspirations for college and plans for applying his or her education and talents in the future. One recipient each was selected for Lindenwood’s St. Charles, Mo., and Belleville, Ill., campuses.

Taylor Harris of O’Fallon Township High School in O’Fallon, Ill., was selected as the Lindenwood University-Belleville scholarship recipient and was presented with the award on April 2. Harris plans to major in human resource management.