For the second straight year, Lindenwood University’s online bachelor’s degree programs have been ranked among the best in the nation for 2015 by U.S. News and World Report. 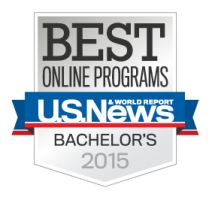 The rankings, released to the public on Wednesday, Jan. 7, 2015, placed Lindenwood’s online bachelor’s degree programs 98th among 297 schools evaluated. The 297 evaluated schools amount to 17 percent of the schools surveyed and constitute an increase from last year’s total of 283 schools, according to U.S News and World Report.

The rankings were based on a variety of measures, including student engagement, faculty credentials and training, peer reputation, and student services and technology. Lindenwood’s online bachelor’s degree programs include bachelor of arts degrees in business, criminal justice, and general studies.

“Lindenwood is committed to providing relevant and rigorous learning opportunities in flexible online formats that meet the needs of our students,” said Lindenwood President James D. Evans, PhD, “and this acknowledgement is a meaningful affirmation of the success of our efforts.”

Also listed were Lindenwood’s online graduate education programs, ranked 162nd (last year, they were ranked 166th), and its online MBA, which was ranked 123rd, an improvement from last year’s ranking of 169th.