Patrick Walker Honored by Student Government as Professor of the Year 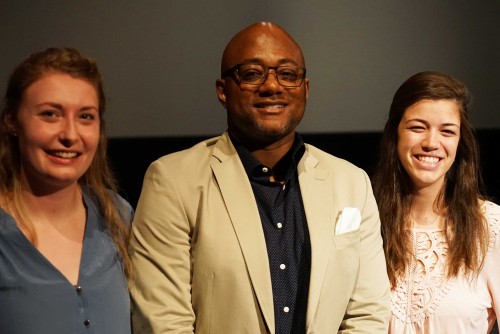 Patrick Walker, associate professor of nonprofit administration in the Plaster School of Business & Entrepreneurship, was named Professor of the Year for 2017 by the Lindenwood Student Government. The award was announced at the faculty meeting on May 3 at the J. Scheidegger Center for the Arts’ Lindenwood Theater.

Presenting the award to Walker were Student Government President Regan Cole and Vice President Samantha Hepperman. The Student Government accepts nominations from the student body during a specified period, after which an awards committee—consisting of the vice president, treasurer, and secretary—narrow down the list. Finally, the General Assembly votes to select a winner.

The Student Government award is the first of a number of faculty awards announced in the spring.

“This professor supports his students both inside and outside of the classroom, being seen at many campus events cheering on his students in whatever they’re doing,” said one of Walker’s nominations. “He is passionate about his work with students and his love for what he does is evident in all that he does.”

"I am very blessed to have even been nominated by our students, who work so well in conjunction with the Student Government and the amazing team of gladiators from the Office of Student Involvement,” Walker said. “This award is a testament to the professors I had in college, graduate school, and law school who pushed me beyond my comfort zone, encouraged me through any setbacks, and told me to keep going. I dedicate this award to any student who presses their way through life, in spite of seemingly insurmountable odds, and never, ever gives up."