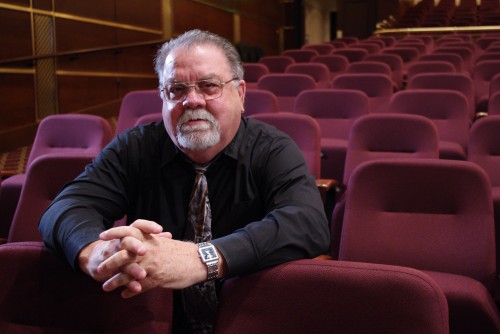 Carlos will spend three weeks in January as a Fulbright specialist doing research on the French New Wave film movement in Paris and working with the faculty at the Institut Americain Universitaire in Aix-En-Provence to lecture on filmmaking and assist in setting up a film studies program there. Carlos applied for the Fulbright in 2014 after the months-long process of assembling the applications materials.

“Ryan Guffey (vice president for student development, who served as a Fulbright scholar in Thailand in 2012) was invaluable in the application process,” Carlos said. “He helped with the very long process and was the one who suggested I do it.”

The Fulbright Program is the U.S. Department of State’s flagship international education exchange program, operating in over 100 countries and granting more than 7,000 awards annually.

Carlos was accepted onto the Fulbright specialists’ roster in October 2014, at which point he joined a group of individuals that institutions could select for different projects. The Institut Americain Universitaire contacted him and recently arrived at the January 2016 timeframe for his visit. He will spend a week before his time there in Paris researching the French New Wave, a film movement started in the 1950s by a group of filmmakers who experimented with new, innovative ways of telling stories.

“They were a group a film critics, including (Francois) Truffaut and (Jean-Luc) Godard, who were tired of the way things were being done and went out into the streets and started making films,” Carlos said. “I’m going to go to the locations where they shot their films, put up cameras, shoot some stills, and do a video blog.”

A full-time professor and the station manager and programmer for Lindenwood’s TV station, LUTV-HD, he began working at Lindenwood as an adjunct instructor in the LCIE program in 1980. He received an MA in writing from Middlebury College’s Bread Loaf Graduate School of English in Vermont in 1979 and studied under Mark Strand, former U.S. poet laureate at the Bread Loaf Writers Conference. He earned an MFA in digital cinema arts from Lindenwood in 2013.

He has worked in film and television as a freelance producer, director, writer, and editor, including time in Hollywood working with Jim Carrey, Kirsten Dunst, Steve Oedekerk, and Denise Crosby. He has made numerous award-winning films, including his short film Dad’s Day, which won awards in national film festivals and was broadcast on television locally and nationally. In 2002, he was voted one of the top 100 multimedia producers in American by AV Video Magazine. He has also published two books of poetry, the latter of which, Dreamfish, was published in 2011 by Cornerstone Press.

Carlos said he intends to take his experience during the Fulbright and bring it back to his students, teaching a course on what he learns.

“Of course, I want to bring it back and share it with the students,” Carlos said. “I would love to be able to build a relationship (with the Institut) that would allow for me to bring students over there, either during the summer or on J-Term—anything to get them excited about it.”