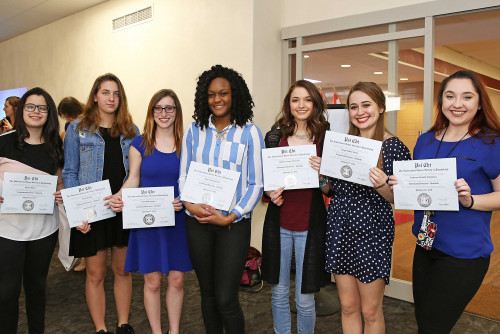 Grant’s research, entitled Does Size Matter? Helping Behavior as a Function of Body Shape and Size, demonstrated that there were no differences in how individuals approached a pregnant or obese woman in a helping situation. Lewis’ work, entitled Verbal Intelligence and Humor, demonstrated a negative relationship between verbal intelligence and appreciation for sexual humor, such that women who had greater verbal intelligence were less likely to find sexual jokes humorous.

“The grant funding these two received is very competitive, and their attendance at the conference allowed them to present their scholarly research on a national stage,” explained Prunty. “They got to meet and mingle with professors and big names in the field of psychology as they shared their research endeavors.”

Other Lindenwood presentations at the conference included one by Kaskauskas, Thomas, and Williams, who presented a study regarding the validity of “gaydar.” Ehlmann presented a study regarding the dynamics of race, crime, and news media. Brewer gave a presentation on her work on the relationship between catcalling and empathy, and finally, Fallen presented research that demonstrated the relationship between frequent military deployment and current romantic attachment styles.

Prunty said that, as a young researcher, it’s very exciting and motivating to engage in intellectual discussion based on original research and she knows her students were validated in their work by having the opportunity to discuss it with their peers in the field of psychology.

In addition to conducting original research, the Psychology Department recently inducted nine students into Psi Chi, an international honor society whose purpose is to encourage, stimulate, and maintain excellence in scholarship of the individual members in all fields, particularly in psychology, and to advance the science of psychology.

Membership requires that a students be of at least sophomore standing with a GPA in the top 33 percent of their class. Psi Chi is dedicated to the advancement of psychological science and knowledge.