Mary Reuter, assistant vice president and executive director of community relations for Lindenwood University-Belleville, was named a Paul Harris Fellow by the Belleville Rotary on June 24 in appreciation of her contributions to the Rotary Club. 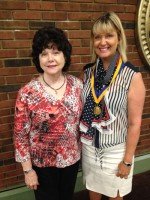 The Paul Harris Fellowship is named for Paul Harris, one of the co-founders of Rotary, which was established in 1905. The Fellowship was created in his honor to express appreciation for individuals’ contributions to the humanitarian and educational programs of The Rotary Foundation and to honor those whose lives demonstrate a shared purpose with the objectives of Rotary. These objectives include funding, implementing, and managing an array of projects that save and invigorate the lives of people around the world, as well as enhance international friendship and understanding.

“It is an honor to be named a Paul Harris Fellow,” said Reuter. “The community relationships and friendships I have formed through the Belleville Rotary are so rewarding, not only for me as a person, but also for the Lindenwood University family.”

Barbara Cempura, president of the Belleville Rotary Club, presented Reuter with the honorary certificate and medallion on behalf of Rotary International.

“Character is earned, not purchased, and if we live by the ideas of respect and understanding that are central to Rotary, we can make our community and work a better place,” said Reuter.