The event will include shotgun demonstrations and offer participants an opportunity to learn about safety prior to shooting at sporting clay targets. The afternoon will conclude with dinner and an auction, with all proceeds benefiting the Lindenwood Shotgun Sports Scholarship Fund.

The Classic is named after Jeff Hansen, the owner of Hansen Tree Service, who became one of the program’s biggest fans after participating in a shotgun sports corporate event several years ago. The contacts he developed by advertising his business on the radio helped the team get recognition at various charitable events throughout the St. Louis area and grow additional support for the program. Tragically, in the summer of 2015, he was killed in an airplane crash. His family started the Jeff Hansen Memorial Fund shortly after attending the Shotgun Sports Awards Banquet in August 2015, guaranteeing that he will be remembered for the amazing person he was and that his passion for the outdoors and shooting will be carried forward into the future through his support of the Lindenwood team.

If you wish to participate in the inaugural Jeff Hansen Memorial Sporting Clays Classic, RSVP by April 10 to Kassandra Schnell at kschnell@lindenwood.edu or (636) 949-4421. Sponsorship opportunities are also available and should be reserved through the same contact no later than April 1.

Why: To provide a great day of sporting clays and benefit the Lindenwood Shotgun Sports Scholarship Fund 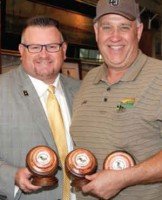