Smith Publishes Chapter in Scholarly Volume Till Death Do Us Part 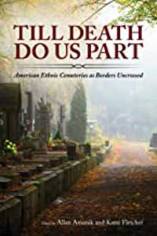 Jeff Smith, professor of history at Lindenwood, published a chapter titled “Till Death Keeps Us Apart: Segregated Cemeteries and Social Values in St. Louis, Missouri” in a scholarly volume Till Death Do Us Part: American Ethnic Cemeteries as Borders Uncrossed (Jackson: University Press of Mississippi, 2020).

Till Death Do Us Part examines burial patterns as an indicator of ways that groups who were different sorts of “other” in society continued to be segregated. Even in death, separations by class, race, religion, and ethnicity were reinforced. Chapters of this volume examine burial and segregation in Chinese, Polish, Jewish, Mexican, and African American cemeteries.

“This volume is a valuable addition to the study of race in America with death and mourning as a prism,” said Smith. “St. Louis provides an unusual case study to understand the contours of servitude in the middle decades of the 19th century.”

Smith’s chapter uses St. Louis burial patterns in the mid-19th century to suggest that the contours of servitude were more fluid after the Civil War than scholars have thought. Using burial records, cemeteries, interment descriptions, and even identifications on gravestones, Smith uncovers evidence that some enslaved people remained in some sort of servitude the rest of their lives. Finding that people of color were still designated as “slave” and “servant” at death (even more than seven years after the end of slavery in Missouri in January 1865 and ratification of the 13th Amendment that December), Smith questions our understanding of what the end of slavery meant to enslaved people in urban areas like St. Louis.