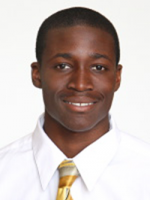 He was diagnosed with a cervical level spinal cord injury and was treated in St. Louis until being transferred and admitted to Shepherd Center’s Spinal Cord Injury Program. After doctors at Shepherd Center determine an appropriate treatment plan for Mr. Thomas, he will begin a rigorous rehabilitation program under the guidance of a full team of medical and rehabilitation specialists, according to a press release issued by Shepherd Center.

Shepherd Center specializes in medical treatment, research and rehabilitation for people with spinal cord injury or brain injury. Founded in 1975, Shepherd Centeris a private, not-for-profit hospital and is ranked by U.S. News & World Report among the top 10 rehabilitation hospitals in the nation.

The family is appreciative for the outpouring of support from the community and requests privacy as they focus on Thomas’ rehabilitation. A fund has been established to help offset medical expenses. Donations can be made to the “Sterling Thomas Contribution Account” at Bank of Oklahoma branches. Lindenwood University is also selling wristbands and Sterling Thomas jerseys. All proceeds go to a fund to support the Thomas family.