HOME
About
News
Steve Holley Named Adjunct of the Year
About NAVIGATION
August 13, 2016 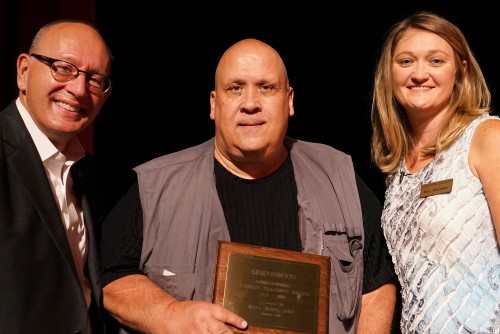 Steve Holley, an adjunct instructor at the Plaster School of Business and Entrepreneurship, was named Lindenwood University’s Adjunct Instructor of the Year during the adjunct conference on Aug. 13. Holley has been an adjunct instructor at Lindenwood since 2011, teaching courses including Advertising and Promotional Strategy, Personal Selling and Sales Management, and Pricing Strategy and Negotiations.

“I am honored and humbled to receive this award,” said Holley. “I’m thankful to the deans and faculty at Lindenwood, without whose support this would not be possible.”

Each year during fall semester, students in Holley’s Advertising and Promotional Strategy class participate in the Chevy Regional Collegiate Advertising Challenge. The competition includes all the universities in the St. Louis area. Each class develops and executes a real-world advertising campaign for a designated Chevy vehicle. The local Chevy dealers and members of their advertising agency provide the challenge and then pick the winners. A team from Steve’s classes has won the competition for four of the past five years (2011, 2012, 2013, and 2015).

David Arns, associate professor and chair of the marketing department at Lindenwood, nominated Holley for the award.

“The students get real assignments and actual feedback from the customer on their presentations, and winning the competition has resulted in approximately 12 Lindenwood students getting paid jobs with the Chevrolet Division of General Motors, a local Chevy dealer, or the local Chevy advertising agency,” said Arns. “Steve’s hard work, numerous outside contacts, and genuine concern for his students’ learning make him an ideal choice for Lindenwood’s Adjunct of the Year.”

Holley said Chevy has the option of using the commercials, slogans, and other creative elements produced by the winning team and did so in the case of a winning team from Lindenwood, running ads created by the team, including a television commercial for the Chevy Cruze.

In addition to the Chevy competition, Holley’s spring and summer classes have produced full advertising and promotional campaigns for St. Louis Civic Pride Foundation, The BackStoppers, and the Responder Rescue Charitable Foundation.