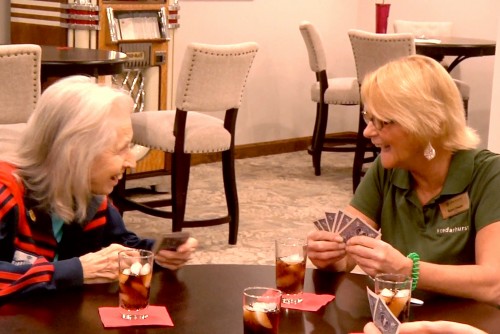 Lindenwood University students have donated their services in an effort to be good neighbors, learn about their craft, and discover the value of helping others.

Peter Carlos, professor of digital cinema arts, said students in his Producing Film and Video Class, made a 30-second commercial, two short training films, and a trio of testimonial videos for Cedarhurst Assisted Living and Memory Care Center, located across First Capitol Drive from the university campus in St. Charles.

“Each semester, we try to find a real-life job for students to do in the community,” said Carlos. “It’s important to learn real-life skills, but it’s also important to realize that we should do what we can go help others because we’re all partners in this community.”

Marina Nichols, a senior majoring in digital arts from St. Louis, said it was a fulfilling experience in many ways.

“I really enjoyed the experience,” said Nichols. “I saw how the workers interacted with the residents. It seemed more like a friendship, as opposed to a worker and resident relationship. It was a lovely environment, and I'm grateful I got to be a part of it.”

Romero Starks said it boosted his confidence to do a real-world video project while he is still honing his craft in school.

“The Cedarhurst staff did a great job making arrangements for us to film,” said Starks. “The staff was also very helpful and seemed very pleased with the videos we put together.”

Starks said while he expected to get a chance to gain some valuable experience, he didn’t count on becoming close to the people he interviewed. He said he’d be excited to get to do something like the Cedarhurst project again.

“It was nice to spend some time with the residents there and just listen to them talk,” Starks said. “They were very lovely people and had tons of personality. The resident I remember most was John. He had such a great sense of humor and made our job very easy and enjoyable. In the future I'd love to be involved in similar projects.”

Student Tom Hartbeck also found the project to be a valuable experience.

“I did the interviews for Cedarhurst,” Hartbeck said. “I think the whole class not only got a chance to work in a real-world situation but got to help people, too. I could tell that the residents at Cedarhurst really appreciated living there and appreciated what we were doing as well.”

Carlos estimated that it would have cost Cedarhurst between $5,000 and $10,000 to contract with a professional to make the videos Lindenwood donated for free.

Click here to see one of the videos the students made for Cedarhurst.